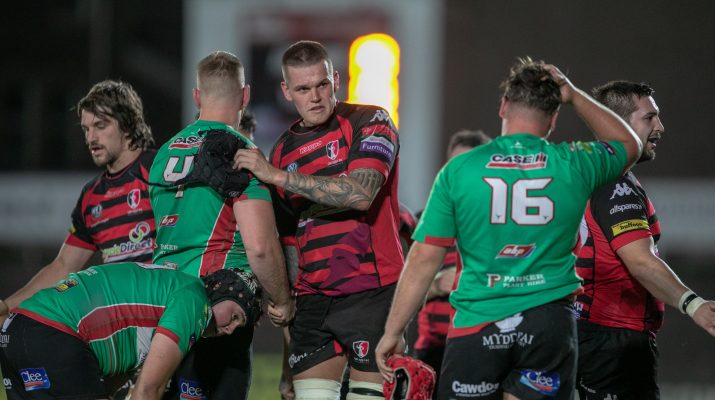 The Wizards had the edge up front for most of the game, being that bit stronger in the contact area and enjoying the lion’s share of possession in tight and loose..

But the Drovers were nothing but tenacious and competitive under No 8 Richard Brooks and had the reserves to draw level 12 minutes from time when young prop Harri O’Connor was at hand to get his side’s third try.

Games between the two clubs have been very tight over recent years and this friendly produced nothing different.

It did not look the case early in the first half when the Drovers enjoyed their best patch of the game with two converted tries taking them14-0 clear.

Fly half Jack Maynard put Kristian Jones through the gap and the centre sent the supporting Lee Rees dashing home from 40 metres.

Scrum half Rees was as busy as a bee with his probing and darting runs and the Drovers went further ahead when a galloping break from lock Joe Powell and quick hands ended with a try from centre Ryan Evans,

Maynard kicked two good conversions before Aberavon hit back just before the break with two tries from Aled Rees.

An overlap on the right saw the right wing home, ex-Llandovery fly half James Garland converting and Rees was again in action when strong forward play put him in for his second try.

The Wizards went ahead in the second half when a set move in midfield carved open the Llandovery defence and let centre Wayne Price stroll in under the posts.

Garland’s half time replacement Aled Thomas – a new signing from Carmarthen Quins – converted and proceeded to look sharp in his distribution and running,

With the home pack monopolising possession, Rees should have got his third try but dropped a sitter of a pass near the Llandovery line

Young replacements in props Callum Williams and Harri O’Connor alongside flanker Rhodri Williams and hooker Garan Williams showed up well as the Drovers fought back bravely.

It was lock Powell who made the initial running for Llandovery’s match saving try with a brilliant run up the middle and although he was caught by the cover, Llandovery College product O’Connor came from nowhere to take Powell’s pass and stride over.

Testament to their good levels of fitness, the Drovers finished strongly, forcing two close range line outs but unable to muscle over for the victory that would have been hard on the Wizards.

The draw was a fair result and the two Premiership games – in Aberavon on October 26 and Llandovery on January 25 – promise to be just as, if not more competitive than this entertaining clash.

*** Llandovery’s game at Carmarthen Quins, scheduled for Saturday September 7 has now been switched to Saturday February 22.

As a result The Drovers open their Premiership campaign at home against RGC on September 21 but before then, they meet Ystalyfera at Church Bank in the 1st round of the WRU Cup on September 14.