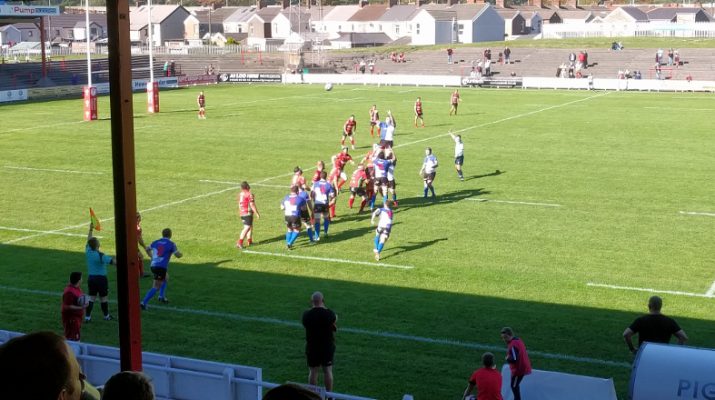 The Wizards had recently taken the scalps of both Pontypridd and Merthyr and added that of the Drovers although there was never much to choose between two very talented sides.

A couple of losing bonus points brought Llandovery up to 21 points but they cede top spot to Ebbw Vale who won at Neath and shade the Drovers on a better 5-4 win ratio.

Llandovery’s Euros Evans – short of seven men on Scarlets U23 duty – was his usual fair and objective self after the disappointment of defeat.

“Either of two very positive sides could have won but finally we were naive at the end when our kickers had three chances to clear our lines before conceding the crucial winning try.”

“Even then we had a chance right at the very end only for Shaun Miles to be denied some inches from the line by a great cover tackle on him by full back Jon Phillips!”

“But we got four tries and two losing bonus points out of it, sure in the knowledge that it will take a very big effort for any side to go to Aberavon and carry the day.”

“It was nip and tuck all the way between two very good footballing sides, intent on free running entertainment” said Lewis.

“It swung back and fore but the final match winning try, made by Chris Banfield with a stabbing run and finished with a flourish by Jon Phillips produced a crackerjack of a finish”

“To beat the big three in Pontypridd, Merthyr and Llandovery in consecutive games took a huge effort from the whole squad and there are some tired bodies out there”

“But the wins will give us renewed confidence in our ability to hold our own with any side.”

In conditions more suited to the French Riviera than Aberavon, early play was fast and furious with the Wizards having to defend for their lives against waves of Llandovery attacks.

The Drovers refused two kicks at goal and were rewarded with a try from young wing Harri Doel from a deft inside pass from fly half Jack Maynard who added the conversion.

Aberavon wing Chris Banfield reduced the arrears with an penalty and it got better for the Wizards when a front of the line-out move ended with hooker Ieuan Davies crashing over .

Both sides moved the ball at will and Doel – taking a pass from centre Ryan Evans – sprinted in from 45 metres.

Back came Aberavon with a second Banfield penalty before Maynard missed a relatively easy kick to leave the game balanced 12-11 to the visitors at the break.

Another Banfield penalty regained the lead before the Wizards stepped up the pace when Llandovery lost the ball in contact and allow full back Jon Phillips to race clear, Banfield converting.

The wing added another penalty as Aberavon scored 13 points in just eight minutes to take command but Llandovery got a lifeline with a penalty try at a scrum to bring it back to 24-19.

Llandovery took the lead when a break from Rhodri Jones put Evans striding clear for a fourth Llandovery try, well converted by Maynard.

The visitors were in the driving seat but then a Banfield break which brought a try for Phillips, converted by James Garland clinched the home win in the most exciting of games.

*** The Drovers must now regroup, faced by the difficult challenge of RGC who are the visitors to Church Bank this coming Saturday in a game which will be televised live at the new kick off time of 5 15 pm.