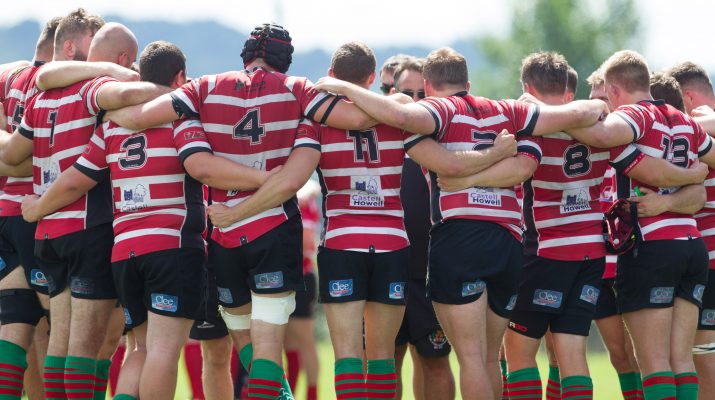 It was Llandovery’s third Premiership defeat on the trot which has seen them worryingly tumble from the top reaches of the table to an uncomfortable fifth.

The one consolation for a frustrated Evans was the losing bonus point which looked very unlikely at one stage in the second half.

Flanker Shaun Miles and wing Aaron Warren were yellow carded and Miles got a red card on his return for a repeat offence at the breakdown.

Bridgend full back Jamie Murphy then scored a 69th minute try to put his side 25-8 before Llandovery salvaged respectability with two late tries from centre Ryan Evans and full back Tomi Lewis and a Gavin Thomas conversion to pull it back to 25-20.

That was as good as the rally got before the final whistle to leave players and coaches rue another disappointing performance.

No fewer than five teams  are covered by just two points in the mid reaches of the Premiership table – Llandovery (22), RGC (22), Newport (21), Cardiff (21) and Carmarthen Quins  (20) – and the Drovers will need to get themselves together  and in the right frame of mind to face Neath in front of the live BBC 2 cameras on Friday night.

They will need to bring the losing run to a firm end to avoid slipping dangerously down the table.

It had looked promising early on after full back Tomi Lewis had got a smart try after just five minutes but the lead was soon last when  scrum half Connor Tantum crossed for the Ravens and Jamie Murphy added the conversion.

Although fly half Jack Maynard regained the lead with a penalty it was all Bridgend from then on with Murphy proving a huge influence behind a well drilled and no nonsense home pack.

He kicked two penalties and the conversion of a try by wing Geraint Roberts to establish a 20-8 interval lead.

Llandovery looked as if they might get back into the game but they failed to use the wind to the same effect as the Ravens had done.

The two yellow cards and a red cost them another try to Man of the Match Murphy but with more ball in the last ten minutes the Llandovery backs struck twice through Evans and Lewis to snaffle a valuable losing bonus point.

It failed to gloss over  an erratic performance which led to Team Manager Andrew Jones pulling no punches.

“Our discipline was very poor with again a high penalty count against us.”

“The tackle area was a major issue, Bridgend were far more street wise than us in that area and we will have to work hard on that this week to clean it up“

“When we had some ball our backs looked dangerous, with Tomi Lewis, Rhodri Jones and Aaron Warren breaking through the lines, Tomi finishing off two tries really well.”

“But we have got to get it right up front.”