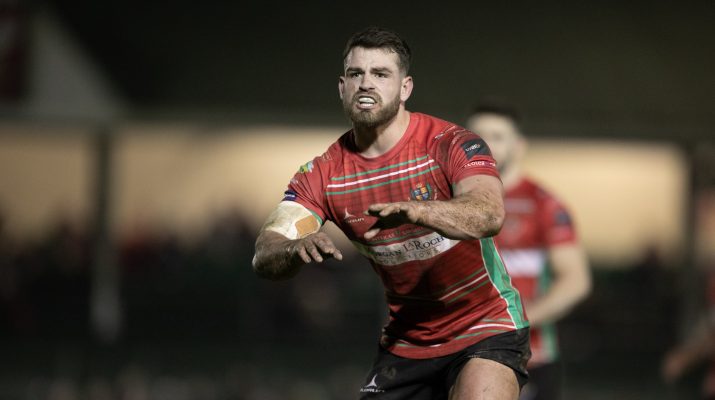 It ended a quite heroic performance from the Drovers who played all but 16 minutes of the game with 14 men and who were at one stage in the second half down to 13 men.

The visitors were 7-0 up before lock Jack Jones was sent off for a head butt on flanker Zac O’Driscoll in front of referee Gwyn Morris and they also lost replacement lock Morgan Jones 11 minutes from time for an off side offence.

The odds were heavily stacked against the Drovers getting anything from the game following the permanent loss of key forward Jack Jones but they confounded the Blue and Blacks with a mixture of wonderful defence and sharp counter attacking.

Llandovery coach Euros Evans was a proud man at the end of the game.

“The players and all the replacements stood fast and firm throughout and they also had the reserves of energy to get the two points for the draw and an extra bonus point for the four tries.”

“We could even have snatched a winning try just before Jack’s drop goal when we were twice nearly over.”

“But three points is a major achievement given the circumstances and the fact that Cardiff had seven Blues in their squad.”

Every man jack of the Llandovery side tackled, harassed, covered and threw themselves into the fray to emphasise the great spirit built up at the club and it would be invidious to signal out anyone.

Perhaps a special mention for the back row of Shaun Miles, Stuart Worrall and No 8 Joe Powell with Powell the main source of line out ball, a ready ball carrier, ruthless tackler and fine coverer to epitomise the never say die attitude of the depleted Drovers.

The quick artificial Arms Park surface suited the Llandovery adventure and ambition but the first try came from hooker Dafydd Hughes who dummied clear from a line out, Maynard converting

The Drovers should have gone further ahead only for leading points score Maynard to miss a sitter of a penalty and worse was to follow when lock Jack Jones could not resist the headstrong temptation of retaliation.

Home fly half Gareth Thompson kicked a penalty before the Drovers replied swiftly.

Captain and scrum half Lee Rees refused an easy shot at goal with a quick tap and go and great handling from flanker Stuart Worrall and an inside pass from wing Aaron Warren got centre Corey Baldwin in at the corner.

Cardiff entered into the Christmas spirit by throwing the ball about and a slick back move worked centre Ben Thomas in under the posts, Thompson converting.

Back came the Drovers with Warren dangerous on the left wing and a series of close range charges by the forwards ended with the indestructible Worrall crashing over wide out, Maynard hitting a terrific conversion.

Thompson got a penalty back with the last kick of the half to leave the visitors ahead 19-13 but facing a huge uphill fight after the break.

But it was Llandovery who got in the first hit when they conjured up a quite brilliant try.

Made by the thrusting Williams on half way, carried on by the dashing Rees and finished by the ever aware Warren, the score had even a partisan crowd out of their seats.

This fourth try clinched a bonus point and with Maynard converting well it was a 26-13 lead before Cardiff rallied, first through a try by full back Ed Howley – and then another through outstanding replacement hooker Joey Tomlinson.

With Thompson converting both tries, the Blue and Blacks were ahead for the first time 27-26 and looking for the killer blow.

Back again came the 14 men with a Maynard penalty and then they looked to be over for a try only for Hughes to be penalised for a push on a defender.

But disaster looked likely when replacement forward Morgan Jones was yellow carded for offside with just over 10 minutes to go and Cardiff got their own bonus point fourth try with a sweeping move that saw wing Joe Gatt go over for a 32-29 lead.

It looked odds on that Cardiff would get another score against the 13 men defence but the drama came at the other after replacement Dino Dallavalle had forced a turnover.

A long distance Maynard penalty came back off an upright and when a Cardiff player knocked on, a team mate looked to have played the ball in an offside position.

The referee awarded a penalty under the Cardiff posts but before Maynard could kick the goal touch judge Richard Deacy intervened to advise Morris that there had been just a simple knock on by one and the same player and it was enough for Morris to change his decision.

From the scrum Llandovery somehow found the reserve to attack to the left and up the middle and just when it looked home defence would carry the day up popped the Maynard brothers.

Fed quickly and accurately by his brother and replacement scrum half Scott, Llandovery’s leading points scorer coolly stroked over the drop goal that secured the most exciting of draws.