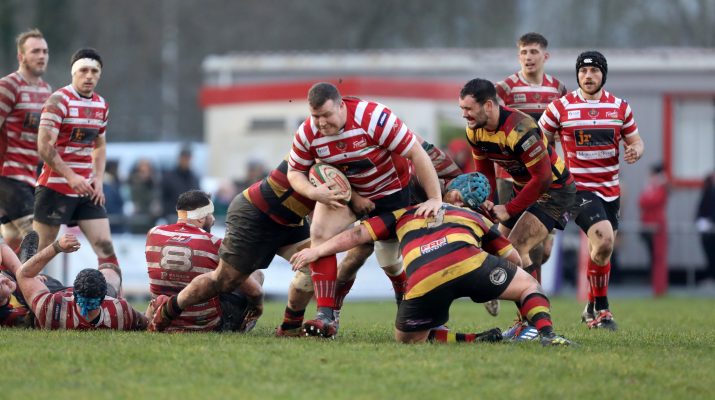 What the Papers Say – Huw S Thomas reports
Copyright Huw S Thomas, and used by kind permission of Huw S Thomas
The early kick off local derby – referred by Nigel Owens – went the way of the Drovers thanks to an impressive first half performance and outstanding defence after the break writes Huw S Thomas

In a game dominated by a gusty wind they scored 14 unanswered points in the first half and although the Quins got two tries of their own, a missed conversion made the difference at the end of the day.

Even then, fly half Steff Marshall – one of seven former Llandovery players in the Quins squad – had a last kick of the game chance with a penalty from inside his half but his attempt was wide.

This fighting win takes Llandovery into sixth and into the top half of the table on 40 points after 14 games but for the Quins, defeat – their first in 2020 – means that their brave pursuit of league leaders Cardiff may now be at an end.

On 48 points, they are still in second place but now trail Cardiff by seven points and have also played one game more than the Blue and Blacks.

Emyr Phillips, the former Llandovery, Scarlets and Wales hooker has had a profound influence on the Quins pack in the short time that he has been its coach but here his forwards were more than matched by the Llandovery pack.

The Llandovery eight scummaged strongly, tackled fiercely in the loose and were able crucially to disrupt the usually rock solid home line out.

Lock Jack Jones, standing in as captain for the suspended Richard Brooks snaffled line outs in primary positions and he and his fellow forwards stopped the Quins rolling maul from making its customary relentless progress.

Back rowers Stuart Worrall and Shaun Miles had fine games in all areas and hooker Garan Williams proved a more than adequate replacement for the injured Ricky Guest and Alun Rees .

His busy presence around the field and excellent throwing in despite the wind were vital contributions to the cause whilst behind the scrum scrum half Lee Rees and centre Craig Woodall continually caught the eye.

Rees – back from his travels to Australia – was sharp, elusive and incisive in all he did and with the Quins defence aware of his threat it gave fly half Jack Maynard the space that has been missing during his half back partner’s three months absence.

Woodall has been very unlucky with injuries through his career but the 25 year old confirmed his potential with his twisting, stabbimg runs and solid defence.

His return will certainly boost the competitiveness, directness and strength of the Llandovery three-quarter line.

Team Manager Andrew Jones was one of many to relish Woodall’s play.

“We are delighted to see Craig back in Llandovery colours after serious injuries. He played for us as a very young man in the Cup final win over the Quins back in 2016 and his return to full fitness is a boost to both his and our benefit”

“Our forwards, too, went really well throughout and to keep the Quins pack quiet was a major plus for us”

It was Woodall who opened the scoring after 19 minutes with an angled run and try, converted by Maynard before wing Morgan Williams outflanked the defence for Llandovery’s second try, well converted by local Carmarthen boy Maynard.

The Quins had lacked cutting edge in the opening 40 minutes in the face of fierce resistance but with the wind in their favour, they looked to have turned the corner three minutes into the half.

Miles was yellow carded at a ruck and in his absence the Quins back division worked former Welsh international and wing Tom Prydie into the corner.

Llandovery scrapped and scrambled with a will but were caught out when a measured grubber kick from centre Nick Reynolds was picked up by wing Dale Ford, allowing Marshall to kick a good conversion to make it 14-12.

Llandovery had a couple of chances to extend their lead but in the end it all came down to Marshall’s last gasp kick which drifted agonisingly wide for the former Drover.