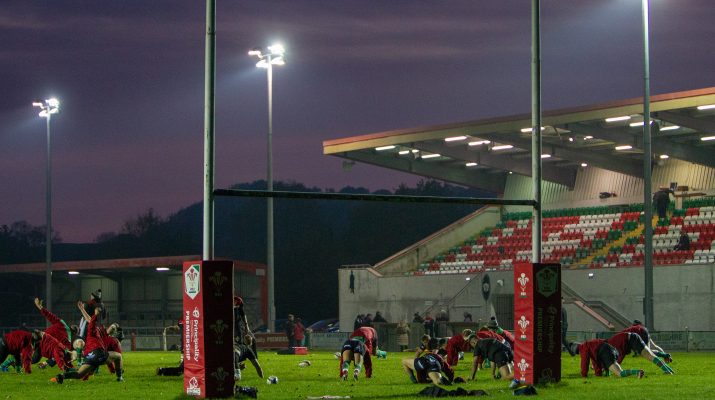 Croeso cynnes iawn i bawb o Glwb Rygbi Glyn Ebwy i Fanc Yr Eglwys heddi! It is with great pleasure that we welcome Ebbw Vale RFC to Church Bank for our first fixture of the 2018/19 season with the Eugene Cross Park side.

Ebbw Vale travel to Llandovery one position, one point and one win ahead of the Drovers in the table and will as usual be formidable opponents particularly as the weather forecast looks damp to say the least.  Their tough pack and strong driving mall continues to bring them the results that have seen them towards the top of the table since their return to the Premiership a few seasons ago. Meanwhile Llandovery will have been pleased to build on their home win against Neath with an away victory against the “All Whites” a fortnight ago. Those that travelled to St Helens will, I am sure, confirm that the game demonstrated how competitive every team in the league is this year and those clubs that currently sit towards the bottom of the table are easily capable of taking the scalps of most of the teams above them. In this context we should look at the Swansea result as a positive away win rather than a bonus point missed! With this fixture we enter a tough section of the season with games also featuring Pontypridd and Merthyr on the near horizon followed by Cross Keys and Newport! If we can come out of this period retaining our position towards the top of the league and in contention for a top two outcome I suspect our coaches will be pleased and confident for the rest of the season but there is a long way to go.

Congratulations go to Jack Maynard, Stuart Worrall and Joe Powell who all played for the Crawshays XV against the Hong Kong XV in the Gnoll earlier this week. It was the first time for the Crawshays to host a fixture against a full international team and whilst they lost it was pleasing to note that the Drovers’ contingent were very worthy of their selection, well done boys!

I am sure our travelling supporters would expect me to wish “Cooky”, a loyal and vocal member,  a speedy recovery as he was taken ill shortly before the kick off in St Helens and has since spent some time in hospital. We should also express our grateful thanks to Dave (our physio) and the Swansea medical team member who stayed with “Cooky” throughout the game until the ambulance eventually arrived, he was in safe hands!

When I wrote the programme notes for the 17/18 fixture with Ebbw Vale I was sadly noting the passing of a loyal supporter, hard working Director and long term friend of Llandovery RFC with the news that Bryan Weaver had finally lost his battle with an illness that had struck within the last twelve months or so. Today I am delighted to welcome Eileen, their two sons and other members of the family back to the Church Bank as sponsors of today’s game. I am sure they will be pleased to meet up with their old friends at Llandovery and we hope to announce shortly some way in which we can maintain the memory of Bryan’s connections with the Drovers over the longer term.