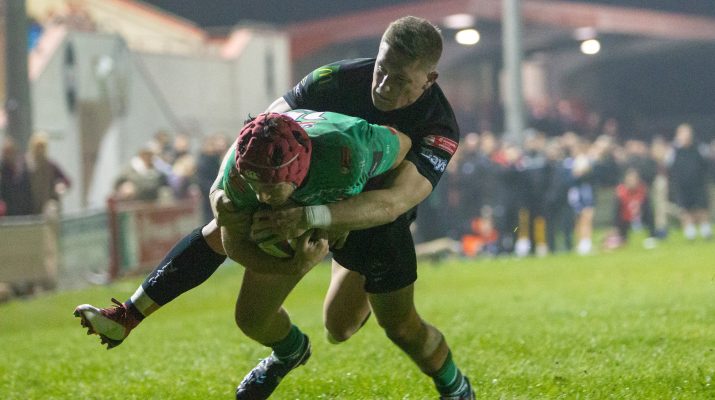 The Drovers may be the most attack minded outfit in the league but the Keys forwards had much the better of tight and loose and the home win was richly deserved.

It was a most welcome four league points for the Gwent outfit who had been struggling to find form in recent weeks and the relief around the ground at the final whistle was palpable.

The Drovers, however, slip down a place in the table – to ninth on 36 points – but still 17 points clear of the relegation zone.

Losing coach Euros Evans was not a happy man.

“We couldn’t finish, chose poor options, gave many forward passes and let them in for one very soft try” bemoaned Evans.

“And their kicking game – through fly half Botica and full back Andrews – was more effective in the slow conditions.”

“The crucial moment in the game came just after the break when we looked bound to score only for their centre to then intercept a long pass and in a flash of an eye they hacked the ball down field and won the chase to push the score to 20-3.”

“That was a real hammer blow just when it looked as if we were right back in the game.”

Most of the early pressure came from the Keys and wing Rory Budina twice threatened out wide.

Llandovery were penalised at the scrum on two occasions and when Keys centre Dylan Fidler fell foul to a high tackle, ex-RGC fly half Jacob Botica marked his debut for the club with a 30 metre penalty.

The sticky underfoot conditions did not suit Llandovery’s style and when they lost the ball in midfield, good Keys handling put wing Wes Cunliffe in wide out, Botica kicking a fine conversion.

Things got worse for the Drovers who were making uncharacteristic errors against a forceful defence in which the two young Dragons James Sheekey and James Benjamin were outstanding.

Botica put over his second penalty before Llandovery did at last get on the scoreboard.

Fly half Jack Maynard missed one difficult penalty but on the stroke of half time converted a close range effort to leave it 13-3 at the break.

Llandovery centre Rhodri Jones was nearly over soon after the restart but a Keys interception and break out from very deep gave scrum half Dan Babos the chance to win a thrilling race for the loose ball, Botica adding the conversion.

The visitors continued to handle sloppily in the face of very aggressive tackling but the appearance off the bench of No 8 Richard Brooks seemed to boost their confidence.

The pack forced its way over for prop Berian Watkins to get the touchdown, Maynard converting to bring it back to 20-10 after 54 minutes.

Maynard’s conversion attempt sailed wide to leave his side agonisingly short of a consolation bonus point.

*** The Drovers will be at Church Bank this Saturday when they entertain fifth placed Newport who come fresh from a stunning 30-28 win at league leaders Merthyr.