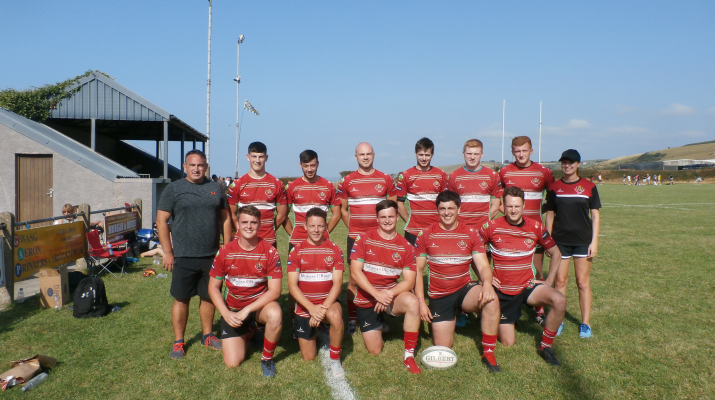 What the Papers Say – Huw S Thomas reports
Copyright Huw S Thomas, and used by kind permission of Huw S Thomas
A very young Drovers side was eliminated from the Aberaeron 7s at the semi-final stage after losing 24-14 to the 2018 winners Gogerddan Raiders writes Huw S Thomas.

The inexperienced Drovers – average age 20 – had showed up well early on with wins over Warriors Veterans and Aberaeron and despite their lack of practice at the sevens game, they looked possible winners in the sweltering heat .

Iestyn Scott, Jac Howells and Drew Ratchford had got the tries in the 19-5 win over the Warriors Veterans and the elusive Carwyn Evans got a brace in the 14-5 win over the host club.

Scott and Lloyd Williams crossed in the narrow defeat at the hands of Bargoed who had ex-Dragons fly half Steffan Jones pulling the strings.

There was controversy over a decision by referee Anthony Jones who penalised Bargoed for a deliberate knock on when Llandovery were odds on to score.

Referee Jones did not follow up with an obvious yellow card and the eventual champions were let off the hook, scraping home by two points.

In a tough semi final against the Raiders, Llandovery’s fragility and lack of power at the breakdown and lack of pace out wide found them out against a side of Cardiff University students led by former Drover Rhodri Wall.

There was a big effort from hosts Aberaeron who got to the Plate final after a 38-5 win over Newquay Barbarians thanks to two tries from skipper Morgan Llewellyn and others from ex-Llandovery hooker Ryan Williams, Pedr Jenkins, Rhodri Thomas and Bleddyn Thomas.

Past winners and favourites Carmarthen Warriors had failed to qualify for the main competition for the first time ever but in the Plate final they finally ended brave Aberaeron’s day with a comfortable 31-0 win, Whitland’s Nico Setaro grabbing two of the five tries.