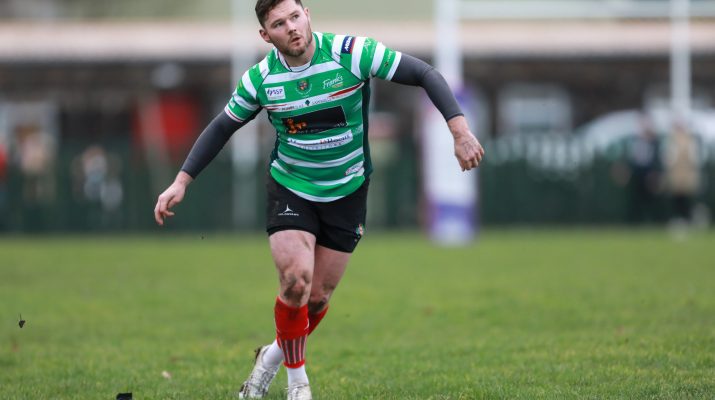 Games between the two sides have invariably been high scoring in recent years and this 63 points encounter had thrills and spills aplenty from first to last, the lead constantly changing and the tries flowing.

The sides shared 10 tries but the excellent goal kicking of Jack Maynard made the difference with the fly half not missing a single conversion of the tries from hooker Dafydd Hughes, wing Richard Williams and three replacements in props Dino Dallavalle and Berian Watkins plus wing Gavin Thomas.

At Colwyn Bay, RGC are always a tough nut to crack and so it proved once again for the Drovers who had travelled up to North Wales on the Friday evening.

Team Manager Andrew Jones reckoned the performance was the best of the season so far.

“This was an excellent performance in that it was massive collective effort from all.”

“We’ve not been far off the pace over the last few games, but it was a big improvement yesterday and clearly our best performance of the season.”

The forwards carried hard throughout getting across the gain line regularly – Iestyn Rees and Joe Powell leading the way along with the outstanding Dafydd Hughes.”

“This led to backs having a lot of momentum in attack and with Dafydd Land and Maynard quick to get our centres Rhodri Jones and Kristian Jones into space, slick passing gave the wings plenty of ball.”

“RGC are a top outfit with almost a professional set up in place and are able to get together far more often in the week to prepare for matches this was a very satisfying for us to go back home with five points.”

“The hope now is that we can carry this on over the next few weeks. January is a really important month for us with three more league games and a WRU Cup quarter final to play.”

Known in the league for their flowing back line, it was the strength of the line out and driving close range maul that proved the key to this the richly deserved Llandovery win.

Three of the five tries came from a catch and drive, the first coming after nine minutes when acting skipper and Scarlets hooker Dafydd Hughes burrowed over, Maynard converting from wide out.

But when RGC forced a turnover it gave Wales 7s flyer Afon Bagshaw the chance to outstrip his pursuers from 45 metres, fly half Billy McBryde hitting the conversion to tie the scores.

The Drovers shrugged that setback by getting their second try from a scrum, wing Richard Williams finishing off an overlap and with Maynard converting, the visitors were back in the lead 14-7.

A clever switch from McBryde then gave right wing Bagshaw space for his second try to reduce the gap at the break to14-12 in what was the entirely expected swift and open game.

Back row Andrew Williams restored the RGC lead after McBryde had kicked his side to near the Llandovery line and his forwards had trundled their way to the line.

Back came the Drovers and when home lock Bryn Jones was yellow carded for pulling down the maul, a close range line out and good protection worked in Dino Dallavalle, Maynard adding his third conversion of the day.

One again the lead changed hands with RGC wing Harri Evans grabbing a bonus point try out on the left wing after Llandovery had been penalised for crossing in midfield.

Yet another attacking line out and converted try secured a bonus point for the Drovers as they went back into a 28-22 lead with still almost a quarter of an hour to go in a frenetic high tempo match.

The try by replacement forward Berian Watkins and the Maynard conversion kept Llandovery in the lead and another replacement in Gavin Thomas pulled them 13 points clear at 35-22 with a fifth try, converted by the faultless Maynard.

RGC would not lie down and they matched the Drovers try for try with a corner effort and conversion by McBryde to make for a thrilling 35-29 end to the most entertaining of games.

*** Llandovery still have one, two or even three games in hand over all the teams in the Premiership and this excellent away win takes a lot of the pressure off the side and they will face Ebbw Vale at Church Bank this Saturday January 11 with a renewed confidence.