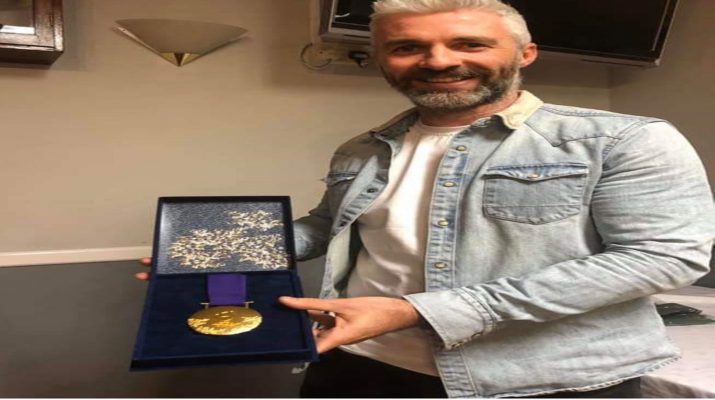 Llandovery’s Church Bank clubhouse was packed to see one of the club’s most famous sons talk of his experience in winning a Rugby World Cup winners medal writes Huw S Thomas.

Who would have thought back in the 1990s that a young Welsh speaking boy from the tiny village of Llangadog and rugby playing member of Llandovery RFC’s Junior Drovers section up to the age of 19, would end up with a Rugby World Cup Winners medal in 2019?

But this is exactly what happened to one time scrum half Aled Walters, South Africa’s strength and conditioning coach, who was an integral part of coach Rassie Erasmus’s plan for the Springboks to win the World Cup out in Japan.

And in front of a hugely attentive audience of rugby men and women from Llandovery and afar – including his Irish wife and also parents who still live in Llangadog – the 38 years old Walters was interviewed by Llandovery assistant secretary Gareth Salt.

Walters went on to give a vivid insight into his role in preparing the Springboks for the big challenge of winning their third Webb Ellis Cup Final.

He related how his work with the ‘Boks had begun in March 2018 when he was headhunted by coach Rassie Erasmus after they had worked together in Ireland for Pro 14 side Munster.

The whole World Cup campaign was meticulously planned by Erasmus with his two lieutenants in defence coach Nienaber and conditioning coach Walters.

The traditional muscular horsepower and physicality of the Springboks had to be kept intact, Walters being a key man in preparing them for the humid conditions of Japan.

Preparation, tactics and use of the bench were three factors in the South African success

The front five were there to out-scrummage and out maul the opposition, the great strength of South African rugby over the years.

They outmuscled the Japanese into submission in the quarter-final and to prepare against Wales they had reserve fly half Elton Jantjies in all their practices play the role in opposition that Dan Biggar would play for Wales.

It was an example of the commitment not only of those who played in the final but the entire squad in the common cause.

Wales gave the ‘Boks a closer game than England but the pressure the forwards exerted at a high tempo in all their games but especially in the final against England was then completed by the second half introduction of six top quality forward replacements.

In the final against England, the arrival of hungry, aggressive forwards such as Vincent Koch, RG Snyman and Francois Louw gave the ‘Boks a renewed momentum that England could not cope with.

Throughout the competition, Louw’s turnovers as a replacement were unmatched and

there was confidence in the side that it would beat England.

Erasmus had surmised that whereas sides like Wales and France would keep coming back at them England would falter against the forward power.

Walters, in his interview by Gareth Salt, referred to the impact the World Cup victory had on South Africa.

On a team tour of the Republic and to the townships where some of our players had grown up in, the welcome from people of all creeds and colour was phenomenal.

Young boys and girls – often barefoot – running alongside the team coach, cheering and waving for five miles or more as they kept up with the speeding bus and it was then that the squad realised what it all meant to the country.

At the end of a question and answer session from the floor and wearing his World Cup Winners medal, Walters presented his old club with a Springbok tie and shirt which will have pride of place at Church Bank.

In return Walters’s former Youth coach Nigel Clarke presented him with a club tie and shield, gently reminding his protégé Aled that he had turned out to be a far better coach than player.

And for the next half hour a long line of men, women, boys and girls queued up to have their photos taken with the homecoming hero, his Cup Winners Medal hanging, not around his own neck – but theirs.

The photos will be a reminder to one and all that a local boy played a key role in preparing the Springboks for their World Cup win.

And in future years when the trivia rugby question is asked “Who was the first Welshman to win a Rugby World Cup Winners Medal” the answer “Aled Walters” will be a gimme for all those thrilled to have heard him speak at Church Bank.