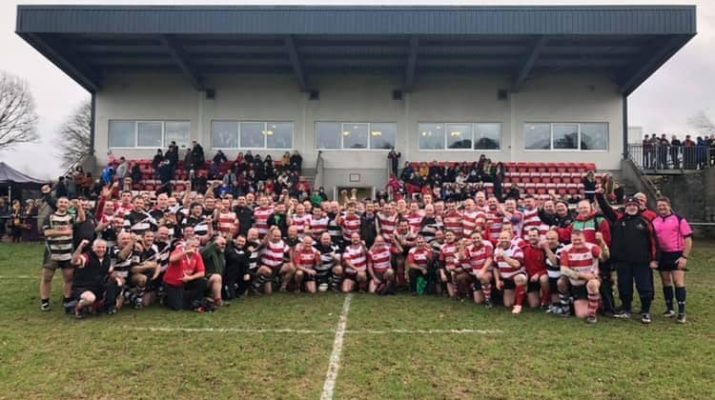 The result of this hugely entertaining and open charity game – wonderfully organised by the Llandeilo club – was of little consequence, the winners were the Breast Care at the Prince Phillip Hospital, Llanelli and the Chemotherapy units at Glangwili Hospital in Carmarthen writes Huw S Thomas.

The units benefited financially from the proceeds of a near four figure crowd and accompanying raffles, hog roast, auctions and record bar takings that were a tribute to the warm charitable support of rugby lovers up and down the Upper Tywi valley.

Over 50 players of all shapes, height, weight and fitness rolled on and off the Cae William pitch at times convenient to themselves and the only wonder was that the 40 year old plus former players of both clubs suffered only minor cuts and bruises and one dislocated finger amongst the surprisingly fierce frenzy of commitment.

That Llandovery won in a fiercely contested was due to the extra bit of class of their back division in which Northampton Saints centre Rhodri Gomer Davies and scrum half Rob Walters shone throughout.

Walters got a hat trick of tries with his sharp eye for the gap and instinctive support work and the still elegant Gomer Davies also got on the scoreboard with a clever first half interception try.

The appearances of Walters, lock Arwel Davies and Ioan Davies brought back fond memories of in the club’s historic first ever WRU Cup win against Cardiff at the Millennium Stadium in 2007.

Dapper full back Davies who played 231 games for the first team is still playing regular rugby for Llandovery Athletic alongside brother Arwel and both looked sprightly on and off the ball.

Llandovery were bolstered up front by the presence of 42 times capped Wales flanker Dafydd Jones who played 37 games for the Drovers before his cap and there was barnstorming performance by former Drovers skipper and No 8 Paul Jones.

There was, too, a cameo performance from Wales fly half Aled Williams who did more tackling in ten minutes – in his own words – than he had done in one season for Swansea.

Also outstanding for the ancient Drovers were try scoring back row Jason Evans and twinkling fly half Neil Clapham but biggest cheer of the day came when 59 year old Geraint Williams – a former Llandovery captain and recent Llandeilo coach – managed to avoid a life threatening tackle by swiftly disposing of the ball with a timely and desperate grubber kick.

On the Llandeilo side there were valiant contributions from lock Rob Davies, scrum half Alec Griffiths, charging Ospreys lock Lyndon Bateman and flanker Dai Roberts who put in an outstanding second half run which all but brought a try

The constantly busy Grifiths got a fine solo try to add to others from centre Christian Riots and wing Gareth Jones whilst for Llandovery centre Barrie Thomas powered through the middle to add to his side’s other try scorers in Walters (3), Gomer Davies and Evans.

Plans are afoot to make the game an annual charity event between these two famous old clubs who were founder members of the Welsh Rugby Union back at Neath in 1881 and where rugby thrives with a huge heart to this day.