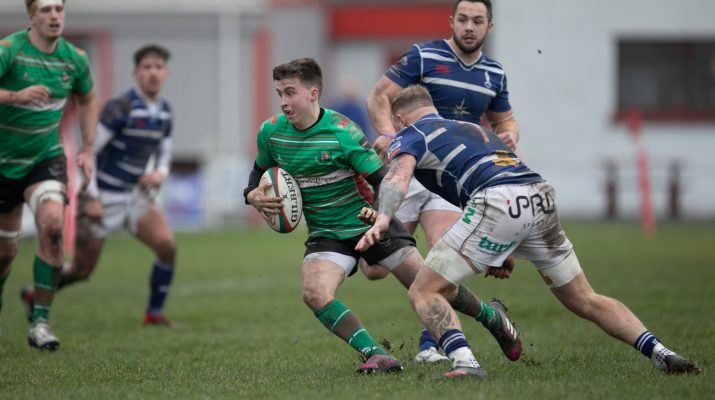 The Drovers went down to surprise defeat at the hands of a Bridgend side who dominated exchanges throughout through the quite magnificent tight and loose work of their pack writes Huw S Thomas.

Llandovery had gone eight games unbeaten but they had their backs to the wall against a side that did not look remotely like the one struggling in the bottom half of the table.

Expectations were high at Church Bank that the Drovers would follow up their top level of performance in the 31-24 win at RGC but they could have rarely been so outplayed in front of their own crowd.

The Ravens produced a master class in their retention of possession in the second half with Llandovery finding it impossible to get their hands on the well protected ball.

Bridgend got over the gain line time after time against some uncharacteristically irresolute tackling and also had the most solid of defences whenever Llandovery briefly threatened.

The Bridgend pack had some real warriors in lock Ben Jones, flanker Jordan Collier and hooker Owen Thomas and Llandovery could not match their commitment and competitiveness.

Lock Rhys Jones and No 8 Richard Brooks kept battling hard but the pack had neither the cohesion nor go forward hunger of the Ravens and with the line out fragile, the omens were never good.

It spoke volumes for the work of the Bridgend coaches Matthew Silva and Grant Hall that they restricted their usually free flowing opponents to the one try – and that a disputed penalty try.

Old timers in the ground could not remember the last time that the Drovers had failed to cross the opponents line but were unanimous that this was deservedly Bridgend’s day.

Coach Euros Evans had no complaints.

“Bridgend deserved to do the double over us and gave us a real lesson on how to keep and protect the ball” said Evans.

“We used our limited possession without our usual crispness but we were always on the back foot in the face of a side that out-powered us and were defensively very savvy.”

A damp day did not make handling easy but good runs from wing Aaron Warren and scrum half Dafydd Land posted early notice of Llandovery’s ambition.

A penalty from fly half Jack Maynard gave Llandovery the lead but Bridgend enterprisingly ran back a Land kick to put hooker Owen Thomas in at the corner, fly half Ryan Evans converting.

It was a welcome boost for the increasingly confident visitors and full back Tyler Williams came inches short of another try in the same corner.

Scrum half Connor Tantum was all but clear up the right hand touchline as Bridgend kept pressing hard against a shaken Llandovery.

Llandovery got a rare good field position just before the break but a driving line out looked to have been stopped on the line, with the referee giving the put in to the Ravens.

A touch judge intervened to indicate that flanker Jordan Collier had come into the maul illegally and referee Elgan Williams signalled a penalty try and yellow card for Collier much to the consternation of the visitors.

Bridgend stuck to their task with a huge will and their forwards consistently kept them moving forward in the loose.

They were rewarded ten minutes into the second half, setting up a try from wing Geraint Roberts who side stepped the covering defenders on his way to the line.

Ryan Evans converted well for a 14-10 lead and the visitors forwards continued to deny the Drovers the slightest whiff of a smell of the ball as they hammered away at the Llandovery line.

Bridgend’s Ryan Evans was yellow carded for stopping a quick tap penalty but it hardly affected the balance of the game, such was the outstanding cohesion and drive of the away eight.

Back on the pitch Evans missed a 40 metre penalty. It made little difference as his forwards kept a stranglehold on the game in the loose and quick transfer from the backs worked in skipper Nathan Edwards.

Maynard had a chance to salvage a losing bonus point at the death but his sharply angled penalty drifted wide to the raucous delight of the jubilant visitors.

If The Ravens reproduce this kind of performance there is no such danger of relegation.

Llandovery now take a fortnight’s rest to lick their wounds and then prepare for an away game at Neath, knowing that they will have to tighten things up a lot before the WRU quarter-final against improving Swansea in March.