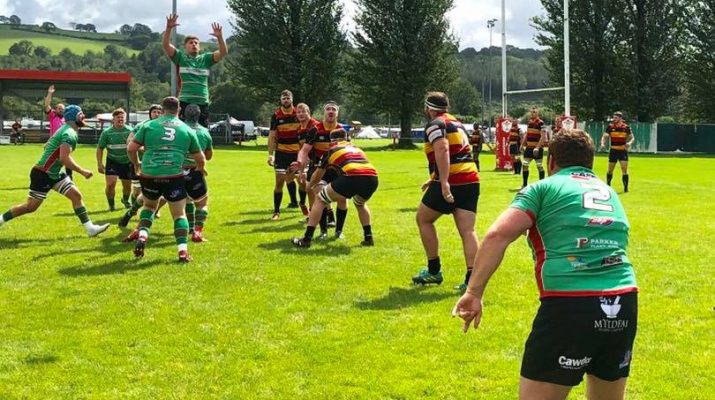 Llandovery looked the better side for much of the game but the powerful English pack- including a number of former Gloucester players – took control in the latter stages to maul their way to victory.

The England National One side from the Forest of Dean have proved difficult opponents over the years in games where their big pack has been well organised, street wise and well drilled and Saturday’s clash was true to type.

“It was – as always – a really good test against a pack which is very physical with scrum and line out a powerful force.”

“It was an ideal pre-season game and gave us the chance to look at a lot of players before we embark on a busy season of Premiership, Cup and Scottish cross border games.”

“We used 28 players, a mixture of old, new and young and I thought we looked sharp in attack behind the scrum in the first twenty minutes of the match.”

The Drovers started in great style with tries from back rowers Miles and Emyr Price plus a Williams conversion establishing a 12-0 lead.

Cinderford came back strongly with their driving mauls putting the home defence under a lot of pressure.

Wing Sam Smith and centre Terry Babarinsa got tries, both converted by fly half James Butler to take a 14-12 lead and it got worse for the Drovers when flanker Matt Lane crossed for another try converted by Butler.

Down 21-12 at the break, Llandovery made multiple changes and young wings Jordan Evans and Liam Cox both impressed in some lively attacks.

Flanker Tom Evans got a try back and a Jack Maynard conversion brought Llandovery to within two points.

But the Cinderford organisation and cohesion in the tight and loose began to tell in the fourth quarter and a George Evans try tipped the scales in favour of the visitors.

“We let in a couple of soft tries and there were a few errors in defence but that’s normal for pre-season. “ said Team Manager Jones

“And the forwards had a really useful and challenging work out against a typically hard West Country pack of experienced players.”

“We’ve got a month before our first Premiership match away at Carmarthen Quins, so the hard work and preparation will continue with a game against Llangennech on Wednesday (Aug 21) and Aberavon next week.”

“With seven or eight regulars from last season yet to return the squad looks strong and competitive.”

“We will also be putting out a VII for the Aberaeron Sevens on Bank Holiday Sunday (Aug 25) when a mixture of young players and old heads will be trying to recapture the title we won in 2017.”