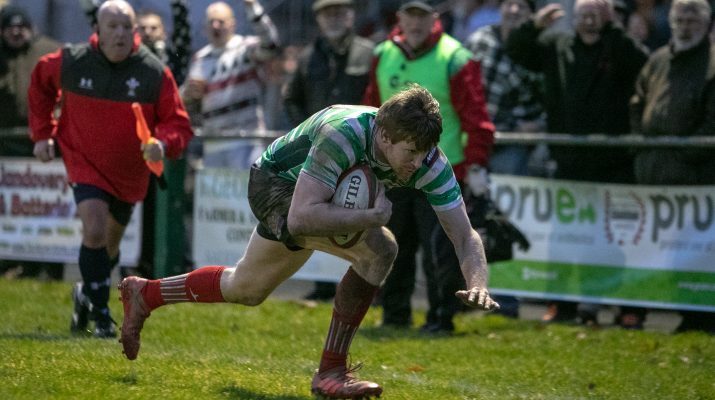 What the Papers Say – Huw S Thomas reports
Copyright Huw S Thomas, and used by kind permission of Huw S Thomas
Cardiff came to Church Bank unbeaten and top of the Premiership table and they made it an 11th consecutive win of the season against a Llandovery side that pushed them all the way before having to be satisfied with a losing bonus point writes Huw S Thomas.

There were key moments in the game that made the difference to the result.

Llandovery refused two point blank penalties when Cardiff were down to 13 men in the first half but then failed to score from two five metre scrums.

Then, in the second half, after Llandovery had clawed their way back to 18-13, they looked as if they might take the lead before Cardiff wing Terry Gee ran in a brilliant solo try from near half way.

A bonus point was no more than Llandovery deserved against a classy Cardiff outfit who now look to have the league title already sewn up before Christmas.

“This was a big game for us “ said winning coach Steve Law “as I had warned the players that Llandovery would be a real threat so we are all delighted with the win,”

Llandovery coach Euros Evans had to be happy with a point but was disappointed that the side lost its accuracy at vital times.

“We had enough possession but found the Cardiff defence a tough nut to crack and we also failed to keep the ball at key attacking moments.”

“There was little to choose between the two sides but they had the edge in composure at the end of the day and took their chances more clinically.”

Two early penalties against Llandovery gave Cardiff prime attacking positions and a patient build up ended with an overlap to give full back Ed Howley an easy try out wide.

The Blue and Blacks went further ahead with a close range penalty from fly half Gareth Thompson but the lead was soon trimmed by a penalty by fly half Jack Maynard.

Maynard missed a 40 metre penalty but Llandovery kept up the pressure and from a close range line out the forwards were all but over.

Cardiff flanker Zac O’Driscoll was yellow carded at a ruck near his posts and at an attacking scrum the home pack forced a penalty try.

Cardiff had to defend hard against a series of attacks and loose head prop Brynley Toms became the second Cardiff player to be yellow carded, penalised at a scrum.

Centre Krisian Jones went over wide out but was recalled for a forward pass by Maynard.

The returning O’Driscoll then forced a vital turn over to relieve pressure and it took some massive tackling from Llandovery backs and forwards alike to keep the league leaders out for an 10-8 interval lead.

There were some big tackles on both sides in a cut and thrust opening to the second half.

A smart run from scrum half Tom Habberfield took Cardiff racing upfield and although centre Max Llewellyn was cut down short of the Llandovery line, he was able to offload to the supporting Thompson.

The fly half added a conversion and then a penalty for a Llandovery offside before Maynard missed a far from difficult 30 metre penalty.

Maynard soon made amends from similar distance to bring it back to 18-13 before an electric burst of speed from Terry Gee saw the wing race clear from 50 metres for Cardiff’s third try, converted by Thompson.

The out of the blue try temporarily knocked the stuffing out of the Drovers but they battled back bravely and from a maul replacement scrum half Dafydd Land probed the blind side to send wing Aaron Warren in for a try, converted by Maynard.

The come back ended there with Cardiff battening down the hatches to stay the side all have to beat in this year’s Premiership.