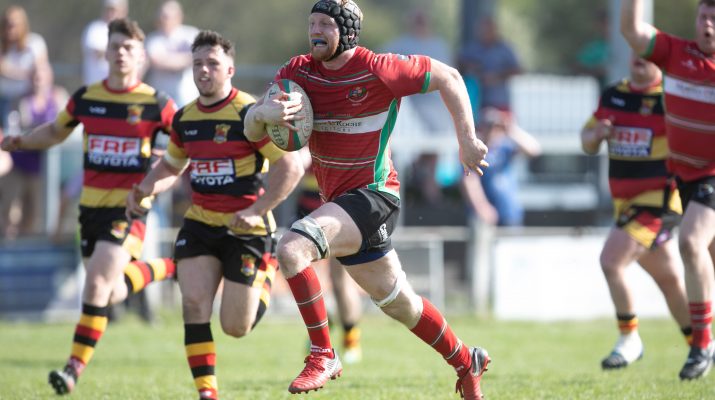 What the Papers Say – Huw S Thomas reports
Copyright Huw S Thomas, and used by kind permission of Huw S Thomas
Llandovery continued their excellent run of league form but had to pull out all the stops to get the better of the Quins in the Tywi Valley derby at Church Bank writes Huw S Thomas.
The win – their 20th in 28 games – took them above Cardiff and into second place in the Premiership table but the Blue and Blacks have two games in hand over the Drovers.
The local derby had extra spice as the Quins coach was the former, Llandovery, Scarlets and Wales hooker Emyr Phillips who turned out no fewer than 130 times for the Drovers and was in the Llandovery side that won the Welsh Cup in 2007.
His charges gave it all just as he had done as a Llandovery player and a tough defence restricted free scoring Llandovery to just two tries.
That said, the Drovers always looked the more adventurous and dangerous and were good value for their win in front of a shirt sleeved holiday crowd of 1,500.
It was a third consecutive win in seven days and the Drovers now have a deserved week’s off training before the remaining two games – away at Newport and home to Aberavon.
On a boiling hot day, the Quins started the better, fly half Jac Wilson – one of four ex-Llandovery College players in their squad – kicking a 35 metre penalty after a scrum offence but the Drovers were soon level with a similar effort from fly half Jack Maynard,
Llandovery had a try by scrum half Lee Rees – made by wing Harri Doel – controversially disallowed after the late intervention of a touch judge for a dangerous tackle.
The ever elusive Rees then ran all of 40 metres to put the Quins under huge pressure but the defence was safe and sound.
Josh Batcup then made a try for the visitors when he made a clean break in the centre to send full back Dale Ford racing in under the posts, Wilson converting.
The Quins forwards contested the contact area with rare gusto but two off side under their posts gave Maynard an easy six points before the break to make it 10-9.
It could have been a bigger gap if not Rees had saved the day with a fine last ditch covering tackle on Osian Knott as the left wing stretched for the line.
Former Quins full back Gavin Thomas split the Carmarthen defence straight from the restart only for a final pass to go astray.
A Maynard penalty attempt to take the lead came back off the upright from 40 metres before the fly half made amends with a 30 metre angled penalty on 50 minutes.
Tackling, chasing and harassing on both sides were impressive in the derby atmosphere and Quins soaked up the pressure with enormous resolve as the game went into its last quarter.
Llandovery eventually broke through when replacement prop Berian Watkins crashed over from close range after the Quins had conceded three successive penalties in desperation.
Quins did more than just hang on, Wilson bringing the scores to 17-13 with a straight penalty but the Drovers finished with a flourish.
A bullocking Watkins charge in midfield sent close supporting flanker Shaun Miles in under the sticks in triumph, Maynard converting to bring to an end a rousing local derby.