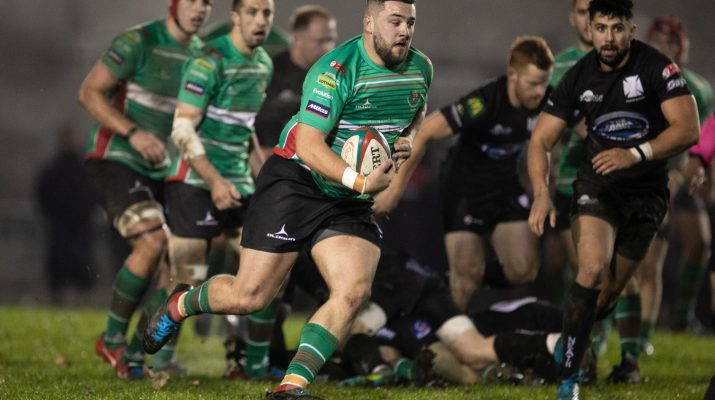 They left behind them three defeats at the hands Aberavon, RGC and Bridgend to move up to 27 points and fifth place after having completed eight out of 30 Premiership games.

In front of the live BBC 2 cameras, the Drovers found it hard to re-find their brilliant early season form that saw them win their initial four games but they were still too strong for a brave, hard working but predictable opposition.

The Mourners had plenty of ball but could not match the creativity and adventure of the home backs.

Llandovery coach Euros Evans was happy with the improved performance.

“The pressure was on us after losing to Aberavon, RGC and Bridgend but the players responded well and got a very valuable bonus point win against a gritty Neath outfit who played far better than their bottom position implies.”

“We have not been playing to our full potential and there were encouraging signs that we are getting back to our early season form.”

“It was hugely pleasing too for our future as a club to see three of our Youth XV and former Junior Drovers  – scrum half Dafydd Land, wing Harri Doel and hooker Garan Williams – feature in the win.”

The Junior Drovers were formed in 1993, some 25 years ago by Dai and Helen Thomas and their formation has played a huge role in fostering young talent at the club from eight to sixteen years of age.

The popular Thomas couple were honoured on Friday night for their vision and commitment in the presence of two of their grandchildren Isla and Isaac Thomas – de rigueur dressed in club colours – and the current squad of Junior Drovers.

Llandovery were up inside five minutes when prop Berian Watkins barrelled over after good initial approach work from fly half Jack Maynard but Neath came back strongly only to find home defence sound.

With plenty of ball, former All Black Regan King – playing in the No 10 shirt – kept the Neath backline moving and when home centre Rhodri Jones was yellow carded for a tip tackle, the pressure built.

Somewhat against the run of play, Llandovery got a second try through full back Gavin Thomas after a very patient build involving a lot of players, Maynard then converting from wide out.

Neath full back Ed Howley missed two straight 40 metre penalties before Maynard put his team 15-0 up at half time with a 35 metre penalty.

A close range Howley penalty cut the deficit but this was cancelled out by a Maynard effort before Neath replacement Leon Ward copped a yellow card for a dangerous tackle.

Llandovery raised the tempo yet could not finish a number of golden chances but a close range line out at last brought success, hooker Mathew Moore crashing over, Maynard converting well.

The Drovers looked for the bonus point as Neath tired and got it near the final whistle when replacement scrum half Lee Rees scuttled down the blind side after being put away by another effective replacement in Kristian Jones.

“It’s the story of the season so far where we compete well in the first half but fall off the pace afterwards.”

“We were hard done by to trail 15-0 at half time having had if anything the better of exchanges but we failed to vary our play to threaten a good Llandovery side.”

“The players gave everything once again in such a tough league but we’ll keep at it and one win will do us a huge amount of good.”

“Newport are the visitors to the Gnoll on Saturday and we’ll be going full tilt to get our first win of the season.”