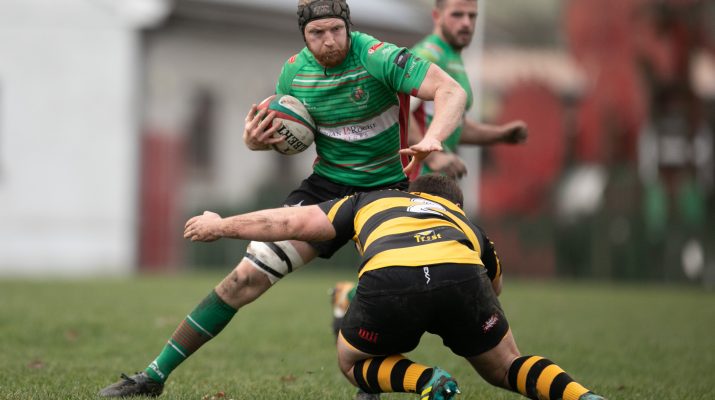 The Black and Ambers went into the game as strong favourites after their brilliant 30-28 win at Merthyr but were always second best to the lively Drovers.

Llandovery had lost to another Gwent side in Cross Keys 26-18 the previous week – their third consecutive defeat away from home – but a return to Church Bank brought them a far happier result in front of the many former players attending a twice yearly reunion.

In a performance that belied their bottom half league position, the Drovers improved steadily throughout the game, scoring two tries in the first half and four after the break.

They return to the top half of the table and will be hoping to press home their advantage this coming Saturday with another home game against Bargoed.

“Llandovery did the basics better, edged the contact area and we have no complaints against a very good and well coached side.”

“We were nowhere near the form at Merthyr but that was because the Drovers were more accurate and precise in all they did.”

Llandovery coach Euros Evans was a relieved man after the win.

“We did not play badly in the away losses Pontypridd, Merthyr and Cross Keys and were unlucky to get just the one point out of the three games so this game was vital for our confidence as a side.”

“The boys beat a very good Newport side with a hugely committed all round performance and we can now kick on from here with some optimism.”

In damp conditions fly half Haydn Simons gave Newport the lead with a penalty after ten minutes before opposite number Jack Maynard tied the scores with a penalty of his own.

Despite the windy conditions, there was plenty of positive intent on both sides but defences were alert and committed in the first half hour.

Competition for the loose ball was intense with flankers Kyle Tayler and Llandovery’s Lewis Ellis-Jones shining before the Drovers eventually went ahead ten minutes from half time.

After a Maynard up and under had eluded the Newport defence, ex-Carmarthen Quins full back Gavin Thomas swept up the ball to race in wide out.

Things got worse for Newport soon after when Scarlets’ pocket dynamo of a hooker Dafydd Hughes galloped in after an inside pass from diminutive scrum half Lee Rees.

With Maynard’s conversion the Black and Ambers found themselves 15-3 astray at the break and facing an uphill attack in the face of a strong second half wind.

The game went right away from them just after the restart when Scarlets wing Morgan Williams used his speed to chase a Maynard kick and get Llandovery’s third try, converted by Maynard.

The third Scarlet playing in Llandovery colours – centre Corey Baldwin – then finished off a slick midfield move to slip through and clinch the home attacking bonus point, Maynard adding the conversion.

A stunned Newport soon conceded a penalty try at a scrum and then a converted interception try to wing Aaron Warren to go 43-3 down against an increasingly confident home side.

To their credit, the visitors enjoyed plenty of possession late on for busy replacement Geraint Watkin to get a consolation try, another replacement Matt O’Brien converting but it was all they could salvage from the defeat.