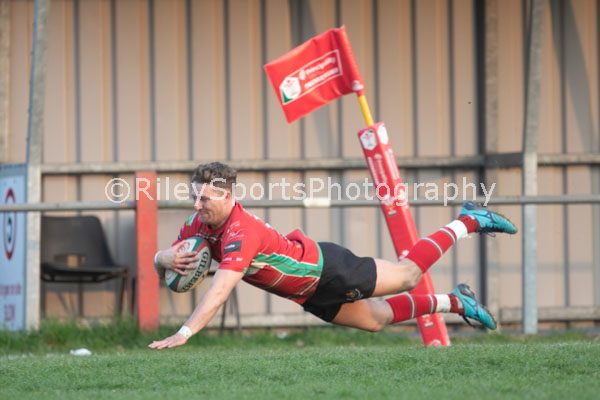 The win sees the Drovers leapfrog Ponty into third place and at the same time delivering a near mortal blow to the visitors’ lingering hopes of the Premiership title.

The speed of passing, handling and running plus the inventive angles of attack by Llandovery backs and forwards alike made for sparkling entertainment in front of the S4C cameras.

The Drovers outscored their visitors by seven tries to three and it would have been fair to say that they could have easily scored two or three tries more such was their superiority in all phases.

The skill levels shown by Llandovery should have convinced any doubters within the WRU of the rightful place the Premiership should hold in future plans.

A video recording of this refreshingly entertaining and skilful match should be forced viewing for the WRU hierarchy who might then accept that the Premiership should be nurtured rather than abandoned.

Instead of slashing funding next year, they might think of rather doubling the grant they five to the Premiership clubs

Llandovery coaches Euros Evans, Simon Davies and Gareth Potter were proud men in witnessing their players put together an 80 minutes of class and style.

“Our best performance of the season” remarked head coach Evans ”and a fine way for flanker Stuart Worrall to celebrate his 100th game for the Drovers.”

“It was great, too, to see our younger players come through with flying colours up front – prop Llyr Green, locks Rhys Jones and Morgan Jones all stood out alongside our more experienced players.”

“Our challenge now is to be consistent and another top performance will be needed next week in the semi final of the Cup against Cardiff.”

Play was immediately fast and in furious and Llandovery took a deserved lead when full back Gavin Thomas put in wing Aaron Warren with fly half Jack Maynard kicking a fine conversion.

Ponty had to defend hard against some adventurous and innovative back moves inspired by booby dazzler scrum half Lee Rees but against the run of play the visitors hit back with a good try of their own,

Fly half Ben Jones made a break before putting in fast supporting scrum half Joel Raikes and then converted the try.

Back came the Drovers to force an error under the Ponty posts and allow Maynard to pop over a simple penalty.

That lead did not last long, Jones kicking a 35 metre penalty with some confidence to make it 10-10.

The fly half then set up a try for lock Chris Dicomidis who showed great pace to run in from fully 30 metres, Jones again converting.

It was all Llandovery from there on starting with a close range line out that worked in burly hooker Ricky Guest only for Maynard’s conversion to come back off the post.

The home side regained the lead just before the break when the dashing Thomas again ran splendidly to put centre Kristian Jones racing in with a long and accurate pass to make it 20-17 .

The pace of the game was unrelenting under the sympathetic refereeing of Dewi Phillips and Llandovery got the bonus point try early in the second half when their outstanding centre Rhodri Jones stabbed through, Maynard adding the two points,

The galloping Warren then got his second try wide out to finish off persistent Llandovery attacking in the most fluid and entertaining of games.

Llandovery were irresistible and a strong home scrum then forced a penalty try only for a game Ponty to get a try back when replacement fly half Lewis K Williams chipped over the defence for wing Alex Knott to get the touchdown.

The last word was inevitably with Llandovery when Rhodri Jones pushed through a kick for wing Richard Williams to dive on to the ball inches from the dead ball line.