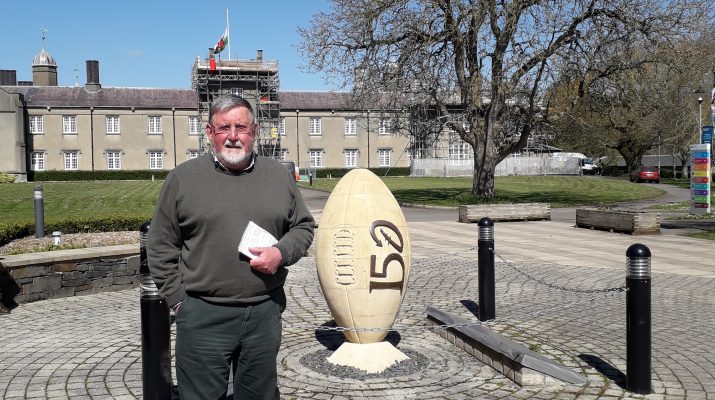 Report
October 20, 2019October 20, 2019
Posted By: Gareth Salt
It is widely recognised – and endorsed by the parent body the Welsh Rugby Union – that the game of rugby was introduced into Wales at Lampeter thanks to the Rev. Professor Rowland Williams, who became Vice-Principal of St David’s College in 1850 and who encouraged students to play it in their spare time.

Visitors driving into the town are greeted with a signpost reminding them that they are entering Lampeter: the birthplace of rugby in Wales

What is not so widely known is that the first game between St David’s Theological College and independent school Llandovery College was not played in the town of Lampeter but probably in the Carmarthenshire village of Caio.

Professor Williams had acquired knowledge of the game as played by Rugby School when a student at King’s College, Cambridge where a band of Old Rugbeians had introduced the game to fellow Cambridge University students.

Articles in the University’s archives recount former students reminiscing about playing rugby at Lampeter in the 1850s and internal rugby matches were probably played between students from 1850 onwards.

For lack of primary sources, the date of that first game is problematic but it was probably in 1866 that the theological students from Lampeter faced their public school opponents from nearby Llandovery.

Llandovery College were playing rugby at the same time as St David’s College, the game having been brought to the independent school in the time of the then Warden the Rev William Watkins (1861-1875) by schoolmasters educated in England and familiar with the game of rugby.

The tiny Carmarthenshire village of Caio sits half way between Lampeter and Llandovery and was chosen as a venue because of its convenient position at a time when coach and horse travel was a challenge to both man and beast.

In his excellent book on the story of St David’s College rugby, The Fighting Parsons historian Selwyn Walters quotes Professor H A Harris who in his book Sport in Britain: Its Origins and Development claims “that the first ever game of rugby in Wales was played in 1856 between a team from Lampeter College and a team from Llandovery College.”

“The game was played in the village of Caio in Carmarthenshire, which is roughly half way between the two colleges.”

Walters suggests that 1856 in Harris’s account is a typographical error and that the story he relates refers to the match held in 1866 making it the first competitive match using the rugby rules as laid down at Rugby School and 15 years before the very formation of the Welsh Rugby Union in Neath in 1881.

Caio was to be used on several occasions as the venue of the game between St David’s College and Llandovery College.

The Llandovery College Journal of March 1879 recounts “the first match for some years between these clubs took place at Caio, a small but picturesquely situated village about mid way between Lampeter and Llandovery.”

“A large field was kindly lent for the occasion by Mr Jenkins of Glanranell. It was not surprising that many of the boys walked a distance of about nine miles to see the match, as several old boys were more than likely to play against us”

Matches of celebration between Lampeter RFC and invitation sides were played in 1966 and 2016 but sadly, the two colleges have yet to celebrate this unique game.

So, if that field loaned for the day by Jenkins could be identified, a pitch marked out and posts erected and teams from St David’s Lampeter and Llandovery College formed, what better way to celebrate once again the famous and historic game back in 1866 than with a rematch between the old boys of the two colleges at Caio?

Or perhaps, more realistically, a celebratory game between the teams of Lampeter and Llandovery – two towns whose clubs were founding members of the WRU back in 1881 and who have such close and important links to the introduction of the game into Wales?