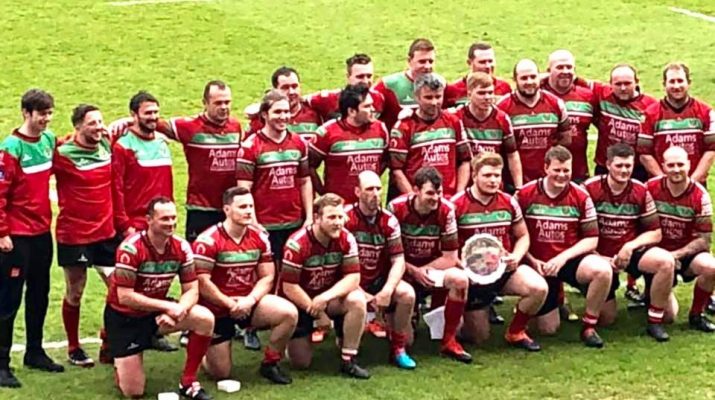 The Llanelli District RU Castell Howell Foods Plate Final at Parc Y Scarlets went the way of the Drovers second XV who urged on by over a hundred travelling supporters just got the better of the Carmarthen Athletic reserves writes Huw S Thomas.

They did so despite being on the wrong side of referee Rudd who penalised them without mercy in the second half and who also sent three players into the sin bin.

That Llandovery won was down to a committed defence and a better use of the ball when in possession, typified by the display of veteran full back Ioan Davies whose good angles of running and precise distribution was at the heart of two first half tries.

Davies, born, bred and educated in Llandovery as were most of his team mates, played an important role for the Drovers side that won the WRU Konica Minolta Cup back in 2007.

His opposite number at full back was none other than a young Jamie Roberts but it was Davies and not Roberts who caught the eye that day and here he was at 40 years of age involved in all that his back division created.

He had valuable support from his brother Arwel at scrum half, fly half Celfyn Davies , bustling centre and skipper Kasper Andreasen and sidestepping wing Joey Morgan

It was the full back’s beautifully timed passes that put in New Zealand wing Zed Fisk and then Morgan for a 15-0 lead after just 20 minutes.

Celfyn Davies added a conversion and penalty but a yellow card for Andreasen for team indiscipline near their own line let the Druids back into the game.

Lock Jamie Williams crashed through from short range after a series of drives from his bulky pack and with a conversion from fly half and skipper Dave Evans the Druids trailed by just 15-7 at the break.

But another yellow card for hooker Ioan Lewis saw the Druids take advantage with a try from hard working centre Barry John which with the Evans conversion closed the gap to one point.

Hooker James Newman and back row Chris Jones carried hard into the Llandovery defence and if centre Jack Harrington had put his wing away instead if trying to dummy through five metres out, the Druids could have been in the lead.

Penalty after penalty rained down on Llandovery heads but despite limited possession they got the next and vital score.

Good work from the pack and ball carrying No 8 Rhodri Williams – son of former Drovers fly half Carwyn Williams – ended with Dan C Davies going over near enough to the posts to make Celfyn Davies’s conversion a simple one.

The Druids stuck at it and an Evans penalty made it 22-17 with under 10 minutes to go.

When replacement Dylan Jones got Llandovery’s third yellow, the Druids threw everything into attack but could not find a way through the 14 man defence.