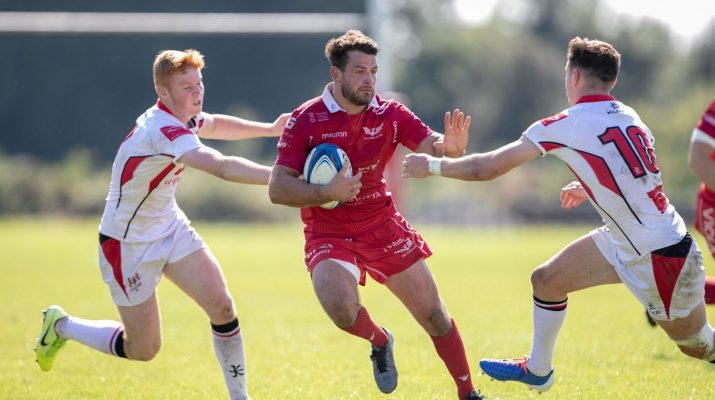 What the Papers Say – Huw S Thomas reports
Copyright Huw S Thomas, and used by kind permission of Huw S Thomas
The Drovers quartet of Rhodri Jones, Stuart Worrall, Dafydd Land and Llyr Green all showed up well for the Scarlets development side against the Irish province but were on the losing side in a four try apiece thriller at Church Bank writes Huw S Thomas

In this opening game of the new Celtic Cup, it was prop Peter Cooper who clinched victory for Ulster with a try in the very last movement of the game as late as the 92nd minute.

Centre Jones and flanker Worrall had been outstanding for the Scarlets with Jones grabbing a fine try and the non-stop blue helmeted Worrall forever in the heart of attack and defence.

Jones also made space and a try for the star of the show, RGC scrum half Efan Jones whose pace and opportunism were rewarded with a hat trick of tries.

Scrum half Land and prop Green were second half replacements and looked to be part of the winning side as the game drew to a close.

Land’s swift service and Green’s urgency in the loose looked to have found their reward when Ulster replacement No 8 Matt Agnew was yellow carded in the 88th minute.

Scarlets replacement and Quins fly half Jac Wilson kicked the resulting penalty to make it 32-30 but a patient and committed build up which went through phase after phase eventually sapped home energy.

Sustained attacks worked in prop Cooper for the Ulstermen to claim maximum points and let the Scarlets leave Llandovery unhappy with two losing bonus points in the sweltering heat.

Two Drovers in prop Jamie Hughes and new signing lock Osian Davies from Newcastle Emlyn were not given game time but remain in the squad for the Celtic Cup campaign that is to continue in the coming weeks.