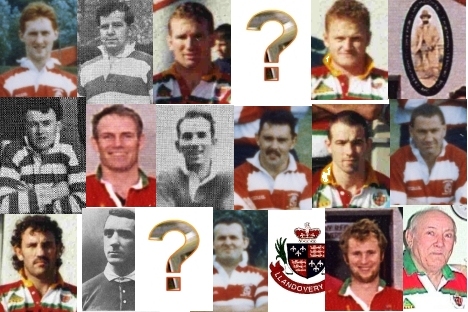 He wins a bottle of wine

Known as the “Golden Boy of Welsh football”. Allchurch played as an inside forward, and began his career playing for his hometown side Swansea Town where he spent over 10 years, captaining the side for several seasons and scoring over 100 goals in all competitions. He attracted attention from numerous clubs during his early years with Swansea but chose to remain with the club until the age of 28 when he joined First Division side Newcastle United. Signing in 1958 for a fee of £28,000, he formed a prolific strike partnership with George Eastham and Len White. In 1962, he joined Cardiff City for £18,000, where he spent three seasons before finishing his professional career with a second spell with Swansea Town. His two spells with Swansea saw him become the club’s all-time top goalscorer.

During his career, Allchurch won a total of 68 caps for Wales, a record which stood until 1986 when it was exceeded by Joey Jones. He also jointly held the record number of goals scored for Wales, along with Trevor Ford, 23, which was eventually broken by Ian Rush. His talents were more widely recognised after his performance for Wales during the 1958 World Cup, in which he scored twice and helped them to reach the quarter finals. His brother Len was also a footballer and the pair played alongside each other for Wales on several occasions.

William John Boston, MBE (born 6 August 1934) is a Welsh former professional rugby league footballer who played as a wing or centre. Born in Cardiff, Wales, Boston started his career as a rugby union player before joining Wigan in 1953. He spent the next 15 years at Wigan, where he scored a club-record 478 tries in his 488 appearances for the club. He finished his career at Blackpool Borough before retiring in 1970. He also represented Great Britain in 31 Test matches, and was part of the team that won the 1960 Rugby League World Cup.[3]

Regarded as one of the sport’s greatest ever players, Boston scored a total of 571 tries in his career, making him the second-highest try scorer in rugby league history. He is an original inductee of the British Rugby League Hall of Fame, Welsh Sports Hall of Fameand Wigan Warriors Hall of Fame, and was awarded an MBE in 1986.

James Driscoll (15 December 1880 – 30 January 1925), commonly known as Peerless Jim, was a Welsh boxer who learned his trade in the boxing ring and used it to fight his way out of poverty. Driscoll was British featherweight champion and won the coveted Lonsdale belt in 1910. He is a member of the Welsh Sports Hall of Fame, the Ring Magazine Hall of Fame, and the International Boxing Hall of Fame.

Keiron Cunningham (born 28 October 1976) is a British professional rugby leaguecoach and former player. A Great Britain and Wales international representative hooker, he played his entire professional career at St Helens, making nearly 500 appearances for the club between 1994 and 2010 and winning numerous trophies. He has been frequently cited as being among the best players in the Super League history and is widely regarded to be one of St Helens’ greatest players of all time.

In 1993, on his 17th birthday, Cunningham signed for his hometown club St Helens from Wigan St Judes. He made his début in the 1994–95 Rugby Football League season, and soon established himself as a world class hooker, renowned for his dynamic running from dummy half and ability to poach tries from short distances. He represented both Great Britain and Wales in international matches, qualifying for Wales because of a Welsh grandfather.

Sir Gareth Owen Edwards, CBE (born 12 July 1947) is a Welsh former rugby unionplayer who played scrum-half and has been described by the BBC as “arguably the greatest player ever to don a Welsh jersey”.[1]

In 2003, in a poll of international rugby players conducted by Rugby World magazine, Edwards was declared the greatest player of all time. In 2007, former England captain Will Carling published his list of the ’50 Greatest Rugby players’ in The Daily Telegraph, and ranked Edwards the greatest player ever, stating; “He was a supreme athlete with supreme skills, the complete package. He played in the 1970s, but, if he played now, he would still be the best. He was outstanding at running, passing, kicking and reading the game. He sits astride the whole of rugby as the ultimate athlete on the pitch”.

Edwards was prominent in the Welsh national team that was to the fore in European rugby in the ’60s and ’70s. He is one of a small group of Welsh players to have won three Grand Slams including Gerald Davies, JPR Williams, Ryan Jones, Adam Jones,Gethin Jenkins and Alun Wyn Jones.

In his later career he became a respected broadcaster and occasional actor. Gravell was also a member of the Gorsedd of Bards, an honour bestowed on him for his contribution to the Welsh language. At the Eisteddfodau Gravell was known by his bardic name Ray o’r Mynydd and was given the ceremonial role of Grand Sword Bearer.

Kenneth Jeffrey Jones OBE (30 December 1921 – 18 April 2006) was a Welsh sprinter and record breaking Welsh international rugby union footballer. He played for both Wales and the British Isles. He is best known in Wales for his contribution to Welsh rugby, but most notably for his winning try against the All Blacks in 1953.

Frederick Charles Keenor (31 July 1894 – 19 October 1972) was a Welsh professional footballer. He began his career at his hometown side Cardiff City after impressing the club’s coaching staff in a trial match in 1912 organised by his former schoolteacher. A hard-tackling defender, he appeared sporadically for the team in the Southern Football League before his spell at the club was interrupted by the outbreak of the First World War. Keenor served in the 17th (Service) Battalion, Middlesex Regiment, led by Major Frank Buckley, which became known as the Football Battalion. He fought in the Battle of the Somme, suffering a severe shrapnel wound to his thigh in 1916. He returned to Britain and after a lengthy rehabilitation he ended the war as a physical training instructor, reaching the rank of sergeant. He also appeared as a guest player for Brentford during the war.

Overcoming doubts about the possibility of playing again, Keenor returned to the game with Cardiff as they embarked on the most successful period in their history. They won promotion to the First Division one season after joining the Football League in 1920. Keenor helped the club to the 1925 FA Cup Final, in which Cardiff suffered a 1–0 defeat to Sheffield United. In 1926, he replaced the departing Jimmy Blair as club captain, leading the team to success in the 1927 FA Cup Final later in the season, in which they defeated Arsenal 1–0. Their triumph remains the only time the competition has been won by a team based outside England.

Keenor was released by Cardiff at the end of the 1930–31 season, which saw the club relegated to the Third Division South. During his time at Cardiff, he made more than 500 appearances for the club, winning four Welsh Cup titles, the FA Cup and the FA Charity Shield in a 19-year association with the side. He is regarded as one of the club’s all-time greats. A statue of Keenor, lifting the FA Cup, was erected outside Cardiff’s new ground, the Cardiff City Stadium, in November 2012 following a public fundraising campaign.

Keenor finished his career with spells at Crewe Alexandra, Oswestry Town and Tunbridge Wells Rangers. During his career, he also attained 32 caps for the Wales national football team. He helped the side win the British Home Championship three times, in 1920, 1924 and 1928, and captained the side on numerous occasions, scoring two goals. Following his death in 1972, the Football Association of Wales secretary Trevor Morris commented, “Fred Keenor will go down as one of the greatest players and greatest characters ever produced by Wales”.

Griffith Morgan (1700–1737), better known as Guto Nyth Brân (Guto being a diminutive of Griffith and Nyth Brân (English: Crow’s Nest) the name of his parents’ farm near Porth[1]), was an athlete. Many of Guto’s running feats have since become merged with legend, and were disseminated by poets and authors such as I. D. Hooson, who wrote the ballad Guto Nyth Brân. Much of what is known of Guto was recorded by William Thomas (Glanffrwd) [cy] in his 1888 book Plwy Llanwynno (Llanwynno Parish).

John Richard Owens (7 January 1956 – 4 November 1980) was a Welsh professional boxer who fought under the name Johnny Owen. His seemingly fragile appearance earned him many epithets, including ‘the Bionic Bantam’ and ‘the Merthyr Matchstick’. He began boxing at the age of eight and undertook a long amateur career, competing in more than 120 fights and representing Wales. He turned professional in September 1976 at the age of 20, winning his debut bout against George Sutton. Owen would beat Sutton again in his sixth professional fight to win his first title, the vacant Welsh bantamweight championship.

Three further victories led Owen to challenge for the British bantamweight championship in only his tenth professional fight. He defeated champion Paddy Maguirein the eleventh round to win the title, becoming the first Welshman in more than 60 years to hold the belt. Owen recorded five further victories, including a defence of his British title against Wayne Evans, before meeting Paul Ferreri for the Commonwealth bantamweight championship. He defeated the experienced Australian on points to claim the Commonwealth title and challenged Juan Francisco Rodriguez for the European title four months later. The fight in Almería was shrouded in controversy and Owen suffered his first defeat in a highly contentious decision.

Owen went on to win seven consecutive bouts in the space of a year to rechallenge Rodriguez again in February 1980 in Wales. He avenged his earlier defeat by defeating Rodriguez on points to win the European title. He challenged WBC champion Lupe Pintor for his version of the world bantamweight title on 19 September 1980, losing a torturously difficult contest by way of twelfth round knockout. Owen never regained consciousness, fell into a coma and died seven weeks later. A statue commemorating his life and career was unveiled in Merthyr Tydfil in 2002

Paolo Francesco Radmilovic (5 March 1886 – 29 September 1968) was a Welsh water polo player and competitive swimmer of Croatian and Irish origin who represented Great Britain at four Summer Olympics. He won four Olympic titles in a 22-year Olympic career. He won four gold medals across three successive Olympic Games, a record which stood for a Great Britain Olympic athlete until broken by Sir Steve Redgrave when he won his fifth gold medal at Sydney in 2000. In 1928, he was the first person to compete for Britain at five Olympic Games, a record that would remain until surpassed by fencer Bill Hoskyns in 1976.

Major Sir Tasker Watkins VC GBE DL (18 November 1918 – 9 September 2007) was a Welsh Lord Justice of Appeal and deputy Lord Chief Justice. He was President of the Welsh Rugby Union from 1993 to 2004. In World War II, he was awarded the Victoria Cross, the highest British award for gallantry in the face of the enemy. A war hero who was prominent in the law and in Rugby Union, Watkins was described as The Greatest Living Welshman.

Retiring in 1954, he became the manager of two of Britain’s most successful boxing champions, Howard Winstone and Ken Buchanan, both of whom won world titles in their weight classes. He later served as mayor of Merthyr Tydfil.

Howard Winstone, MBE (15 April 1939 – 30 September 2000) was a Welsh world champion boxer, born in Merthyr Tydfil, Wales. As an amateur, Winstone won the Amateur Boxing Association bantamweight title in 1958, and a Commonwealth GamesGold Medal at the 1958 British Empire and Commonwealth Games in Cardiff