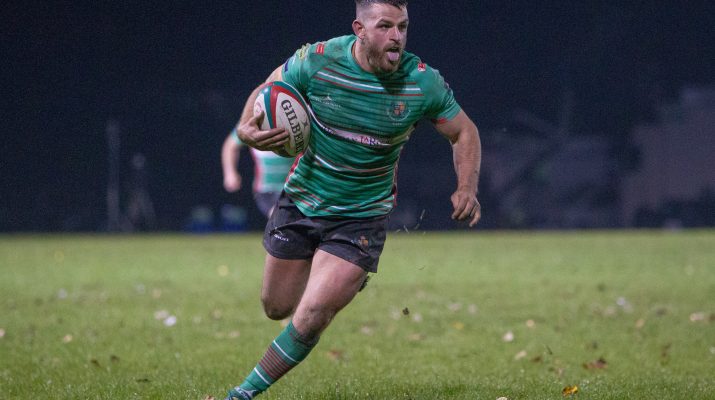 Their free running approach was ideally suited to the fine and fast St Helen’s pitch but a brave Swansea – led by former Llandovery flanker Duane Eager – also played their part in a match that was closer than the final score might suggest.

It was not until the 74th minute that the Drovers eventually pulled clear after the All Whites had got two second half tries from the young Ospreys duo of wing Ben Cambriani and replacement prop Mitch Walsh.

Leading try scorer Aaron Warren got the second of his two touchdowns to put the issue beyond doubt and take the Drovers up the table to fourth behind Merthyr, Pontypridd and Ebbw Vale.

These teams are Llandovery’s next opponents in reverse order of their table positions and will be a huge test for the squad against three sides that all have a huge physical presence up front.

Team Manager Andrew Jones who played for the Drovers many a time at St Helen’s acknowledged that it had been a tough Swansea challenge.

“We’ve got a decent record against Swansea over the last few years, but the games have always been very difficult.”

“We started really well, the game was open which suited us and we looked dangerous in the wider channels.”

“Lee Rees, Rhodri Jones and Aaron Warren attacked from deep and made good ground so we were disappointed to go in at the break with just the one try to our credit”

“Four or five really good chances went a begging and when Swansea got to 11-5 in the second half – and really threatened – those missed chances looked very costly.”

“Swansea have to be given a lot of credit with their big pack making things very challenging for us in that second half.”

“They tightened things up, contested the contact area with gusto and slowed our ball down.”

“It was really good to see our pack standing up to a physical challenge for the second week running, Joe Powell, Jack Jones and Stuart Worrall leading the way with some big hits and counter rucking”

“It was disappointing not to get a bonus point but it was a vital away victory against a fast improving Swansea team who were strengthened by some very talented young Ospreys such as back row Morgan Morris and hooker Ifan Phillips – son of former Neath and Wales captain Kevin Phillips.”

When teenage wing Harri Doel grabbed a try after ten minutes things looked easy but although half backs Lee Rees and Jack Maynard put plenty of pace and movement into the game, the Drovers missed a lot of try scoring chances.

The other score of a one sided first half was a penalty by Maynard which established a precarious 8-0 interval lead.

Maynard soon added a penalty but when Cambriani – son of former Swansea and then Wales Rugby League wing Adrian Cambriani – got a try to pull it back to 11-5, the game was finely balance as the home pack upped their work rate..

The lanky Warren then took advantage of a quick Rees tap penalty to gallop through for a try converted by Maynard but this was almost immediately answered by the Walsh try to make it 18-10 with 10 minutes to go.

Swansea looked for a losing bonus point but the Drovers kept their composure and with six minutes to go were rewarded with the key Warren score, but one try short of the elusive bonus point.