Guest of honour was Rhodri Gomer Davies. Rhodri played 19 times for the Drovers during the early 2000s, at the start of his senior career. He was capped from Wales Under 16s to Under 21s and for Wales 7s, and has played professional rugby for a number of teams, including Northampton Saints and the Scarlets and Newport Gwent Dragons regions. He was forced to retire from playing rugby in 2011 due to injury, and is now seen regularly on S4C as a rugby match commentator..

The following Awards were presented by Rhodri Gomer Davies: 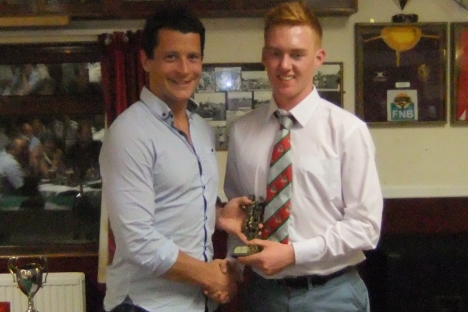 Most tries scored for 1st XV – Chris Knight, collected on his behalf by Lee Rees

Note: Club Ambassador of the Year was Emyr Phillips, awarded prior to the Dinner since Emyr is in Japan as a member of the Wales team

Clubman of the Year – Gareth Salt

Outstanding Services to the Club – The Rugby Management, collected on their behalf by 1st XV coaches Lyndon Lewis and Euros Evans

Special Award – Andrew Jones, who has made over 500 appearances for the Drovers, was presented with a blazer embroidered to record this feat

Special Award – Rob Walters, who retired from playing at the end of this season, was presented with a specially drawn caricature commemorating his 300-plus games for the club