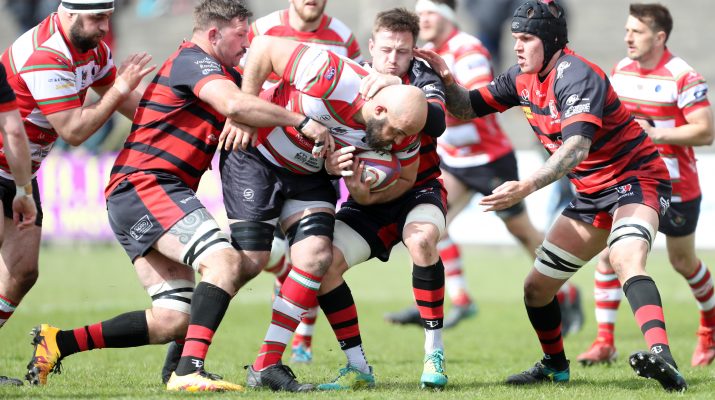 The Drovers were still smarting from their 24-23 defeat at the hands of Aberavon in the semi final of the WRU Cup two weeks before but this time it was they who won another thriller by a single point.

It was neat revenge and made it three wins over Aberavon in four games this season but as Chairman Peter Rees signalled –  “ I’d have swapped all three wins for a Cup final visit to the Principality Stadium!”

“That said, the win gives us an incentive to win all three of our remaining league games and get up to the upper reaches of the table.”

Euros Evans’s men started with a bang, lost the lead but then finished with a fine head of steam to win a five tries to four encounter which included a hat trick from wing Aaron Warren.

Llandovery’s attack was as inventive and ambitious as ever and deserved full praise for running from all angles, orchestrated by the effervescent Lee Rees at the base of the scrum.

The Scarlets duo of full back Tomi Lewis and centre Corey Baldwin – two of four Old Llandoverians in the team alongside locks Jack Jones and Griff Evans – threatened at all times as did the ultra consistent Rhodri Jones.

Jones’s attacking instinct, allied to wondrous defence was a feature of as exciting a Premiership game as one could see and a credit to the too often maligned semi-pro game.

Early on, a break by Llandovery scrum half Lee Rees was foiled by a try saving tackle from fly half Dan Edwards and wing Ashley Evans also came near to a try for the visitors.

A clever kick from Llandovery fly half James Garland set up a strong attacking position and a patient build up ended with the lanky Warren going over wide out.

A yellow card for flanker Lee Purnell put Aberavon under pressure and they were lucky to keep out close range attacks  until centre Rhodri Jones burst through an a finely angled run for Llandovery’s second try, converted by Garland.

Tails up, the Drovers went further ahead with another Warren effort before the Wizards at last got on the scoreboard when flanker Lloyd Evans followed up his own kick for an opportunist score converted by  Edwards.

On the stroke of half time, a strong home scrum eventually forged a try for No 8 Andy Waite, converted by Edwards to leave it 19-14 to Llandovery at the break.

Clever interpassing brought Warren his hat trick and a bonus point for his side but replacement hooker Luke Davies crashed through for a third Aberavon converted try.

With the home forwards carrying well, a bullocking effort from Waite and an Edwards conversion gave Aberavon the lead 28-24.

Llandovery looked done and had to defend for their lives as the Wizards ramped up the intensity of their forward attack in the last ten minutes.

Waves of attacks were repelled by the Llandovery forwards who tackled themselves to a standstill under skipper Jones, Marco Dallavalle, back rowers Stuart Worrall and Lloyd Pike and all around.

Prompted by the booby dazzling Rees, the Drovers refused to lie down, they swept upfield after a long break out from replacement wing Ryan Davies and got the decisive try from nuggety replacement flanker Jordan Evans to end the best of games in great style.

***Attention now turns to the Good Friday afternoon clash in Carmarthen where the Quins will be favourites to continue their recent good form.

Impressive away wins at Merthyr 27-23 and Ebbw Vale 28-16 have seen the Quins go up into fourth place in the league table and eighth placed Llandovery will have a real battle on their hands.