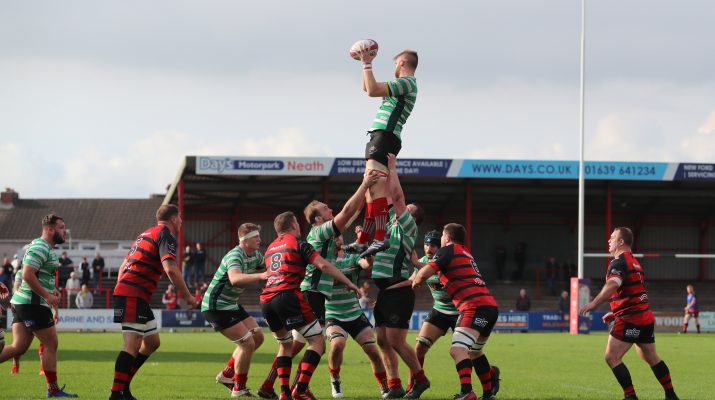 DROVERS BACK IN ACTION

With the Welsh government relaxing its covid rules, it means that Llandovery will be back in Indigo Premiership league action this week end writes Huw S Thomas.

In form Newport will be the visitors to Church Bank on Saturday (KO 2 30pm) and will be certain to pose a huge threat to the Drovers who have not played for seven weeks.

The Black and Ambers finished top of the East Conference in the Indigo Premiership Cup, six points clear of Cardiff.

On Saturday they outplayed Bridgend in the quarter final of the Indigo Premiership Cup, scoring seven tries in a comprehensive 45-17.

Newport coach Tyrone Morris described their first half performance against Bridgend as one of the best 40 minutes of rugby the side has played for some time in scoring five tries for an interval 35-10 lead.

Five of the total of seven tries were scored by the backs under the leadership of centre Matt O’Brien.

The performance was confirmation of the rich vein of form that his side had been showing at the start of the league campaign.

Newport have played two Premiership league games, beating Bridgend at home 25-9 and then enjoying a most impressive and exciting 30-25 win at Aberavon.

The Drovers, on the other hand, have played just the one league game, a bonus point 32-3 win at Church Bank against North Walian opponents RGC.

Tries from Man of the Match back row Iestyn Rees, centre Kristian Jones, wing Ashley Evans, fly half Angus O’Brien and wing Rhodri Wall plus two conversions and a penalty from O’Brien put the issue beyond doubt.

Llandovery are yet to play their Cup quarter final at home to Pontypridd who qualified for the last eight on Saturday with a narrow 30-25 win over RGC up in Colwyn Bay.

The Drovers  have lost just once since the start of the season in September 2021 but have plenty on their plate with the visit of high flying Newport.

With their last game, against RGC, played as long ago as December 11, coach Euros Evans will at least have a full and fit squad to choose from, in what promises to be a very tight contest.

Llandovery Secretary Robin Barlow has been busy trying to re-arrange the games postponed because of covid and been successful in finding two new dates in the calendar..

***The Drovers will be away to Aberavon on Saturday April 9 and again away to Carmarthen Quins on Good Friday April 15, both games to kick off at 2 30 pm.