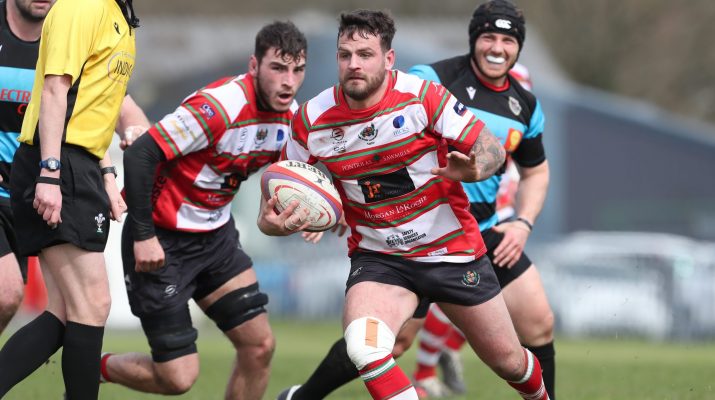 Defeat keeps the Drovers in eighth position in the Premiership table with four game left to play – Aberavon Carmarthen Quins and Llanelli away,  Bridgend at home.

Llandovery looked as if they had barely recovered from the previous week’s heart breaking defeat against Aberavon in the semi final of the WRU Cup and had to give second best to the most balanced Cardiff side to visit Church Bank in the Premiership.

Coach Euros Evans – as sporting and as clear as ever – said as much.

“OK we had some key players missing but on the day we were beaten by a very good and powerful side, with many players on the verge of or with professional contracts.”

The Blue and Blacks still have hopes of finishing ahead of current leaders Newport in the Indigo Premiership and on this impressive form could well do it.

With skipper and No 8 Morgan Allen – son of former Wales lock Andy Allen – rampaging in the loose and scrum half Jamie Hill pulling the strings behind they had a potent force.

It was all Cardiff early on and wing James Beal came close to crossing before Llandovery had their own period of pressure.

They eschewed two easy penalties in search of a try but eventually took the lead  when centre Rhodri Jones cut a great angle to send hooker Craig Thomas steaming over.

Fly half James Garland converted and the Drovers should have gone further ahead only for No 8 Joe Powell to spill a pass from the mercurial Jones.

Lee Rees, operating at full back, Jones and  wing Tomi Lewis caused  problems in Llandovery’s best period of the game but it did not last long.

Full back Cameron Winnett’s break put Cardiff in the ascendancy but the home defence scrambled well despite losing centre Craig Woodall to injury.

Centre Mason Grady then closed the gap with a great solo run from half way, outstripping all pursuers on his way to the line.

The Drovers lost possession in some good attacking areas and Cardiff were quick to counter in the most free flowing of games,  watched by an unusually large contingent of some 130 ladies, gathered at Church Bank on a lively Ladies Day outing, organised by local celebrity Helen Thomas.

Wing Dan Fish spilled a try scoring pass feet from the line but when Llandovery lost the resulting scrum it gave centre Max Llewellyn  – son of former Wales captain Gareth Llewellyn – the room to slip through under the posts, fly half Luke Scully converting for a 12-7 interval lead.

That soon became 17-7 after hooker and former Drover Alun Rees burrowed over from a line out, only for Llandovery wing Tomi Lewis to score a try from a neat cross kick from Garland who added the easy conversion.

But Cardiff were too strong in the breakdown,  too swift behind with centres Grady and Llewellyn a real handful and replacement lock Sean Moore burst away from a ruck for Scully to add the extras.

Skipper Allen got the bonus point from close range as the Drovers could not match the physicality of the Cardiff pack before Grady got his second .

With a Scully conversion it was suddenly 36-14 and although the dashing Lewis clawed a try  back in an act of defiance – Garland converting –  the silky Grady got his hat trick to put the Drovers firmly in their place.