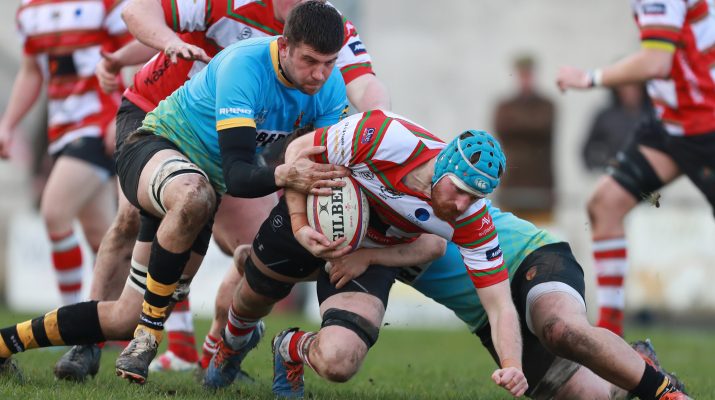 Interest was high in this Premiership league clash between the two sides that had headed the Premiership Cup conferences – Llandovery from the West and Newport from the East writes Huw S Thomas.

Llandovery had won 10 of their 11 Indigo Premiership cup and league games, Newport 11 out of their 13 and this high quality league clash did not disappoint either set of vociferous fans.

It was the East that took the honours in a rousing game that saw blue shirted Newport turn a 17-3 deficit into a fine victory thanks to 24 unanswered points in the second half.

The big hefty Newport forwards controlled the second half and their ball retention and weight at the break down brought them a deserved win.

Llandovery coach Gareth Potter rued the chances that the side had not taken advantage of in the first half but was sporting enough to acknowledge that Newport were deserved winners.

“We had gilt edged opportunities to be far further ahead in the first half but Newport lasted the pace better and we have no complaints.”

Newport coach James Dixon believed the Newport win was an important step forward for the team.”

“We said to the players that a Church Bank encounter is always a test of ability and promise and we are delighted to see the character of the boys in turning around a 14 point deficit at half time.”

“Our line out and breakdown work were key factors after the break, we took our chances well and also kept the Drovers scoreless – not an easy task.”

The Drovers struck first when a patient build up from a close range line out ended with flanker Lloyd Pike getting in at the corner.

In Newport’s first dangerous attack they forced a penalty, allowing promising fly half Will Reed to kick a penalty after 20 minutes.

Llandovery centre Kristian Jones missed a long range penalty but then Newport were hit by two tries in as many minutes.

Both were beautifully created by slick handling, passing and interplay amongst backs and forwards , the first scored by lock Osian Davies, the second by full back Tomi Lewis and, with Jones converting one, the score was suddenly 17-3.

At the start of the second half Newport lost centre Matt O’Brien for a trip on Lewis.

There was a strong case for a penalty try to add to the yellow card as the trip occurred 15 metres from the try line after Lewis had chipped ahead and was in the act winning the race for the touchdown.

It was not the only contentious decision from otherwise excellent referee Elgan Williams who refused a Will Thomas try after deciding that he, the referee, had accidentally obstructed a Newport defender in the Llandovery build up.

Soon after Llandovery lost wing Ashley Evans for a deliberate knock on and from then on, Newport took a firm grip on the game.

Hooker Will Griffiths crashed over from close range for a try converted by Reed and soon after wing Elliot Frewen crossed to bring his side back to 17-15.

In the final quarter Jones let the visitors off the hook with a missed penalty from 30 metres and the centre was then yellow carded for a dangerous tackle.

Reed’s conversion made it 27-17 with eight minutes to go and the canny visitors soaked up late pressure to come away with a most impressive comeback win.