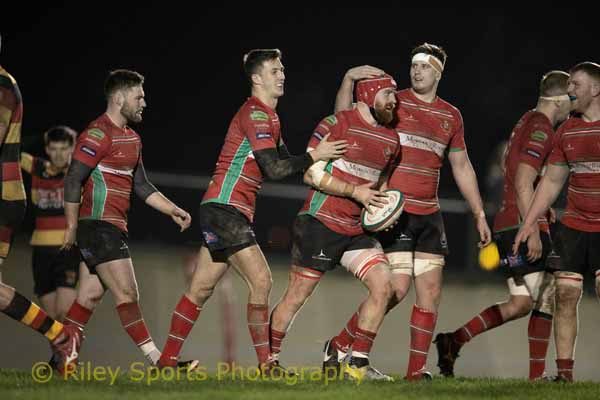 In the evening game that kicked off at half past seven and did not finish until referee Ben Whitehouse blew his whistle at ten past ten, it was the Drovers who deservedly came out on top writes Huw S Thomas.

The Quins had much the better of the first half before the failure of the Park floodlights led to an hour’s delay before play resumed at a quarter past nine.

Llandovery, however, looked a different side in the second half and from trailing 8-3 they pulled away for an eight point victory that denied poor Quins of a consolation bonus point.

Half the Quins squad – including the skipper Haydn Pugh – had played for Llandovery at one time or another as had coach Emyr Phillips (130 times) but there was no love lost between the two sides, eager to improve on their mid table positions.

The eagerly awaited first clash of the season between the two Tywi Valley Premiership clubs had brought the live S4C cameras to the Park but the game did not live up to expectations.

The first half in particular served up some very average rugby with the ball more often than not kicked as far as it would go, then returned with interest only for the ping pong to continue its merry way until someone made an error.

In that first half the Quins won their own scrums and line outs with ease and regularly upset Llandovery’s set piece but for all their dominance they went into the break just 8-3 up.

Full back Aled Thomas missed an easy first minute penalty after Llandovery had folded at a scrum and then missed the conversion of a corner try from wing Dylan Morgans after a cross field kick by ex-Drover fly half Steff Marshall.

Home flanker Ellis Lloyd was then sin binned and in a rare incursion into the Quins twenty two, Llandovery fly half Jack Maynard – born and bred in Carmarthen – kicked a good penalty.

Llandovery tackling and covering was again outstanding to warm the heart of defence coach Gareth Potter – back watching after a nasty illness – and all the Quins could show for their lion’s share of possession was a Thomas penalty.

Their backs were a major disappointment, finding it difficult to create anything in the face of an organised and at times ruthless defence, led by centre Rhodri Jones.

The lights suddenly blew right at the end of the first half and it took a full hour for repairs to be made before the game could restart.

The delay looked to have benefitted the Drovers more than their opponents as they piled into everything with a gusto unseen in the first half.

Their line out was more controlled with flanker Joe Powell shining, the scrum less fragile and their mauling and rucking more dynamic under the leadership of skipper and No 8 Richard Brooks.

A Maynard penalty made it 8-6 and then came the key moment of the game.

The fly half’s attempt at a drop goal was half charged down – putting Llandovery’s Stuart Worrall onside – and the ex-Narberth flanker snapped up the loose ball as it ricocheted back into his safe hands off a padded upright.

The try was right under the posts, making Maynard’s conversion a formality and the visitors were in the lead for the first time 13-8.

The confidence looked to have drained out of the Quins as the game went into its final stages and things got worse when lock Lee Taylor was sin binned for collapsing a maul near his own line.

The Llandovery forwards carried hard to set up a an easy drop goal for Maynard before play had to be stopped for close on a quarter of an hour after Llandovery centre Ryan Evans was concussed in a tackle.

With two minutes left the Quins looked desperately for a losing bonus point at a close range scrum but were thrown back by a fierce riposte from the Drovers pack.

Winning coach Euros Evans could afford a smile at then of the 160 minute marathon.

“To get seven points out of two very tough away games over the festive season will do our confidence a lot of good.”

“We are looking for greater consistency in the new year and this will hopefully get us on a good run in an effort to get higher than our current sixth position.”

*** Before the Premiership continues with a home game against Bedwas on January 12, the Drovers will entertain Championship side Beddau in the first round of the Welsh Cup.

Can they repeat the great feats of 2007 and 2016 and win the Cup for a third time? – the battle campaign starts at Church Bank this Saturday.