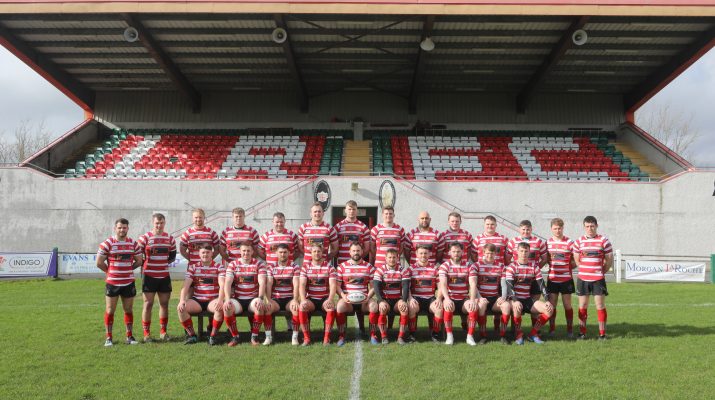 END OF SEASON FOR THE DROVERS

Guests at the dinner were Llandovery coaches, Euros Evans, Gareth Potter and Tom Hancock along with the Drovers’s loose head prop and Italy U20 international Dino Dallavalle who was accompanied by his fiancée Welsh international centre Hannah Jones.

Following a three course meal – part sponsored by Frank’s Ice Cream of Ammanford there was a Sports Quiz and finally a Question and Answer session with Evans, Potter, Hancock and Dallavalle.

The quartet fielded a variety of questions with insight and appreciation of the issues not only in the Premiership but in the Welsh game at large.

Topics ranged from the quality of the semi-professional game, the position of the regions, Llandovery’s place in WRU thinking, the role of Llandovery’s excellent Junior Drovers in identifying local talent along with the sad disappearance of the once traditional end of season tour.

One 25 Club member – John Herring – announced the offer of £5,000 to re-establish a club tour next May and there was general consensus from the floor that such a tour  would be an excellent way of furthering the camaraderie amongst the squad.

The 25 Club was formed in 2018 as a fund raising promotion and is restricted to just 25 members each of whom contribute £1,000 annually.

BBC radio and TV rugby commentator Phil Steele has heaped praise on the scheme for its innovative initiative.

“The scheme looks tremendous value for money to me with a wide range of benefits and I’d be the first to sign up if I lived in Llandovery” said the Cardiff based broadcaster.

In the three years it has run the scheme has made a profit of over £50,000 for the rugby club.

Benefits of membership include free entry with a guest for all home games, two free international tickets, hospitality before a selection of home games and an all inclusive end of season Gala Dinner.

Added to that is an automatic entry before every home game into an original first try/last try competition.

At the start of the season every member is allocated a number from 1 to 25 for home league and cup games at Church Bank.

Steele was particularly complimentary of this idea.

“To be able to go to every home game with the possibility of walking away with £50 in crisp bank notes makes every home game hugely interesting and exciting.” added Steele

“Imagine the fun. You’ve been allocated number 2 and go down to the club for a Saturday game and come back with £100 in cash for the wife after your hooker has scored not only the first but also the last Llandovery try!” said Steele.

“ I don’t understand other clubs not picking up on the idea but the Drovers have stolen a march here.!”