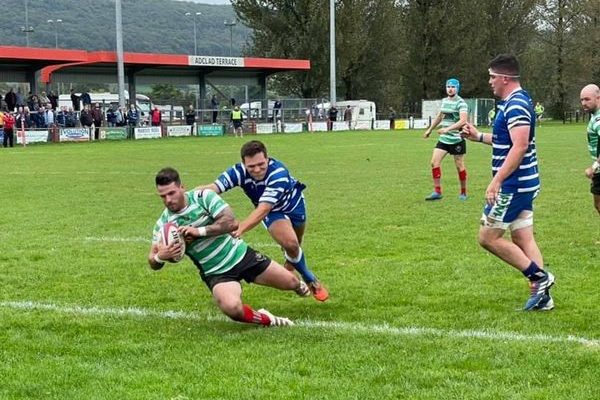 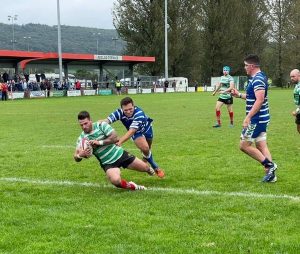 DROVERS GO DOWN TO FIRST DEFEAT OF THE SEASON

The Drovers were hot favourites to retain their unbeaten record in the Indigo Premiership Cup but had to give second best to an inspired second half performance from Bridgend writes Huw S Thomas.

Trailing 19-5 at the break, the Ravens put in their best ever performance at Church Bank, scoring an astonishing 20 points in the space of 10 minutes to run out thoroughly deserved winners.

They dominated the second half just as the Drovers had dominated the first and made light of two late yellow cards to bring home the bacon.

Player coach Matthew Jones had a great influence on the game, his distribution of the class that got him his Welsh cap against Canada 16 years ago but he was supported by a rousing pack performance under lock Chris John.

”I told the boys at half time to be patient and wait for the tide to turn.” said the 37 year old Bridgend born Jones.

“Llandovery had much the upper hand in the first half but I stressed that we were – by the very nature of rugby – bound to have a period of pressure to balance things up.”

“And this is what we did in scoring 20 unanswered points in 10 minutes to turn the game on its head.”

Llandovery Team Manager Andrew Jones rued the plethora of missed chances in the first half.

“We were in control and had chances for another three tries in the first half but fell short.”

“But Bridgend were a real force in the second half, we got too loose, shipped points through bad discipline and could never build up the head of steam we had in the first 40 minutes.”

“We will have to get our act together against Aberavon this week, the only side in both West and East Conferences to have a 100% record after four games.”

A Garland break kept up the pressure and wing Callum Williams was all but over before a quick tap penalty by the fly half sent centre Rhodri Jones through, Garland converting for a 14-0 lead inside the first quarter.

Bridgend, prompted by the evergreen Jones responded in style, a fluent back move outflanking the home defence for wing Caine Woolerton to dive over wide out,

A Garland through the legs pass gave Williams a straight run into the corner and half time arrived with the Ravens tackling tested to the limit.

Flanker Reuben Tucker’s try early in the second half, converted by fly half Matthew Jones made it 19-12 before dazed home flanker Stuart Worrall was yellow carded.

The game was tied when Ospreys academy replacement prop Ben Warren charged over from a line out for a try converted by Jones who then added a penalty for the lead.

The other Ospreys academy replacement prop Garyn Phillips was outstanding in the loose and the composed Jones turned the screw with another penalty for the increasingly confident Bridgend who were playing fluent rugby to deny Llandovery any worthwhile possession.

Yellow cards for lock Chris John and Warren checked Bridgend momentum but they defended cleverly against a Llandovery close range scrum and then pinched a five metre line out to record a famous win.