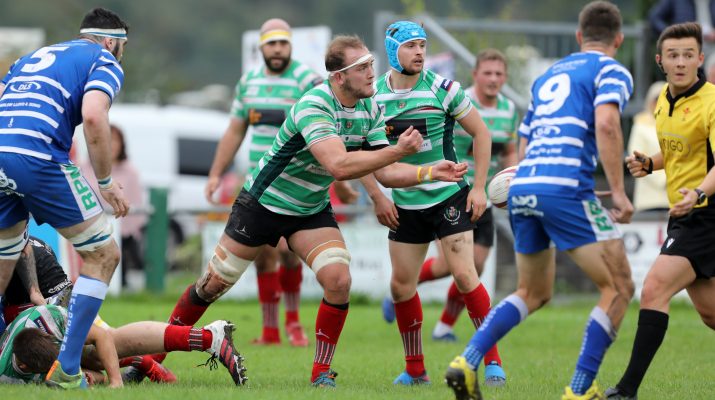 Uncategorized
May 3, 2022
Posted By: Jim Boxall

There was huge disappointment for Llandovery whose winning run came to an end in dramatic fashion when Bridgend full back Cai Evans put over the winning penalty with the last kick of the game writes Huw S Thomas.

After gaining maximum 5 point hauls in beating Aberavon, Carmarthen Quins and Llanelli – all away from home – the Drovers were expected to chalk up another victory but Bridgend were doughty opponents and took their chances the better.

They also had in full back Cai Evans – son of Ieuan – the most accurate of goal kickers in putting over three conversions and three penalties.

Llandovery were – in many ways – their own worst enemies, trying to force passes and over complicate attacks whereas Bridgend were more direct and crisper in everything they did.

The Drovers got two losing points for their stuttering efforts but they hardly deserved more such was their profligacy in attack, shakiness in defence and poor decision making.

Llandovery may have improved their league position but it will be little consolation for this loss by the one point in 59.

They are 4th currently but must wait to see the outcome of the Merthyr – Aberavon game on May 7th to see where they will eventually finish in the 12 team league.

“Our own worst enemies” said coach Gareth Potter. “Take nothing away from Bridgend who took chances clinically but with the amount of ball and possession we had, it’s a game that slipped away from us.”

“We sometimes play too much rugby, ball in hand, and if we are not accurate, sides will counter and benefit from our mistakes.”

The Drovers started brightly, throwing the ball about and a break from centre Rhodri Jones ended with prop Jamie Hughes being pulled down near the Bridgend line.

But it was the visitors who took the lead when wing Dewi Cross took advantage of sloppy home passing to scoop up a loose ball and sprint in from half way, full back Cai Evans converting.

Llandovery kept attacking at will but their support work and finishing let them down at crucial moments.

The Ravens were more precise and direct in their build ups and when Joe Gatt broke through, co-centre and skipper Nathan Edwards was at hand to go in under the posts.

Evans converted and soon added a penalty to make it 17-0 against badly shaken and over confident opponents.

The Drovers finally got on the scoreboard thanks to their forwards when a close range line out worked in hooker Craig Thomas, fly half Kristian Jones adding the conversion.

Loose play in attack was costing Llandovery points but they got their second try through Jones for the game to be finely poised at half time.

Jones spoiled a good break by throwing an impossible pass to wing Aaron Warren but a bit of magical control of a kick ahead by full back Tomi Lewis brought the scores level.

The conversion from Jones gained the lead but Bridgend came close to regaining it, their forwards being held up on the Llandovery line.

Evans did regain the lead with a 40 metre penalty before replacement flanker Zac O’Driscoll was yellow carded, spoiling a good attacking position for Bridgend.

With No 8 Morgan Strong outstanding, Bridgend defended well at the breakdown to deny Llandovery the quick ball that their backs yearned for.

The Drovers threw caution to the wind and replacement Will Thomas looked to have got the vital winning try, converted by Jones.

The Ravens resilience and fight took advantage of yet more careless Llandovery defence  to work wing Ed Howley over, Evans converting brilliantly from the touchline for a 27-26 lead.

Kristian Jones looked to have saved the day for the Drovers with a late penalty but in a dramatic end they were penalised for holding on some 40 metres out and Evans stepped up to calmly slot the winning penalty.