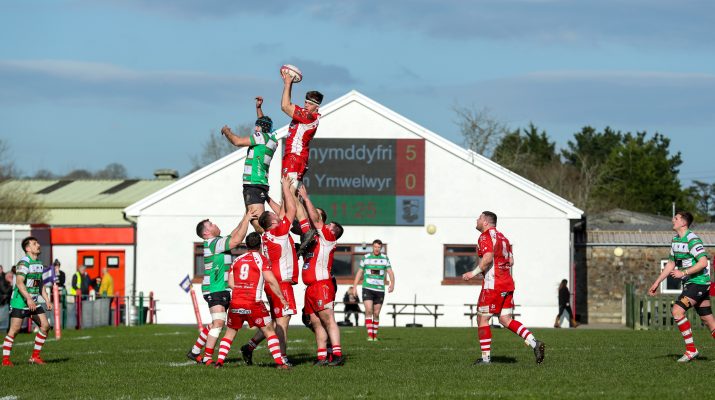 DROVERS FADE BADLY IN THE SECOND HALF

In a dress rehearsal of the quarter final Cup game at Church Bank on March 12, Ponty were too strong up front for a crestfallen Llandovery writes Huw S Thomas.

The home side had enjoyed a fine 43-36 at Merthyr but the visitors dominated exchanges after the break and completed a decisive win, their late and fourth try sealing a bonus point.

On this display Ponty will be favourites to advance to the Cup semi final against Aberavon.

All the rugby in the first half was played by the Drovers but they only led 15-14 at the break after Ponty had snatched two tries against the run of play.

It was all Ponty in the second half, their forwards strong at the breakdown and their backs knocking back Llandovery runners with fierce mid-field commitment.

Llandovery woes were compounded by losing three key men to injury –  scrum half Lee Rees, centre Rhodri Jones and lock Joe Powell , the loss of Rees a severe blow to Llandovery tempo and things got worse towards  the end when Rees’s replacement – Scott Maynard – also received a bad bang.

Coach Euros Evans will be worried that his side faded badly against both  Merthyr and Pontypridd and Thursday’s game at Swansea will be a real test of character against a rejuvenated All Whites who enjoyed an excellent away win at Carmarthen Quins on Saturday.

The swift Llandovery start Llandovery saw full back Tomi Lewis finish off a break by centre Rhodri Jones but Ponty replied in style when a clever kick from ever busy wing Dale Stuckey fashioned a try for centre Ceri Morris, fly half Jake Lloyd adding the conversion.

Play was fast and furious and a close range line out set up a try for home hooker Jamie Cox only for the visitors to hit back when full back Cole Swannack finished off a rare counter attack, Lloyd converting.

A yellow card for lock and Ponty skipper Kristian Parker proved costly with Joe Powell slipping through to regain the lead for Llandovery.

Play was more akin to seven-a-side as the Drovers attacked from everywhere and Lewis was refused a try for a forward pass.

The visitors had played for most of the first half with little ball, taking their limited chances clinically, trailed by 15-14 and could have even been up at the break if Lloyd had not missed an ambitious penalty .

A Jones penalty was cancelled out by one form Lloyd before the excellent Stuckey intercepted a wayward pass to race in from 40 metres, Lloyd converting for a 24-18 lead.

Away tails were up, Lloyd adding another penalty as the pack swarmed up field and from there on the Ponty forwards kept possession and won the contact area hands down.

The Drovers lost all cutting edge behind and were easy prey to cast iron tackling. They played too much in their own half and were reluctant to make headway through the boot

The Valley Commandos clinched the bonus point when skipper Parker crashed over wide out and Stuckey kicked a touch line conversion to leave Llandovery licking their wounds.

The Cup game on March 12 promises to be some contest.