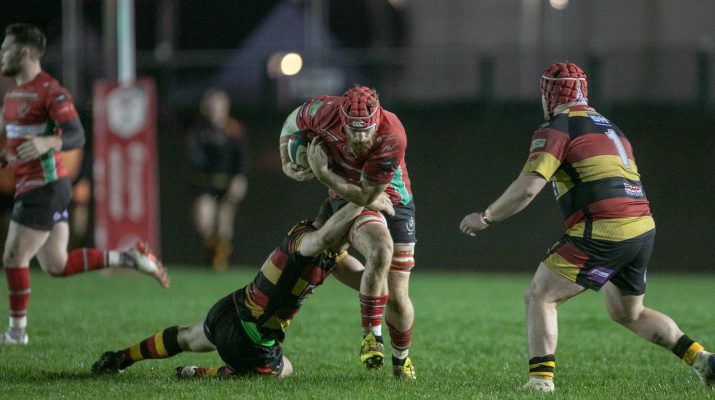 Croeso cynnes iawn i bawb o Glwb Rygbi Y Quins i Fanc Yr Eglwys heddi! It is with pleasure that we welcome Carmarthen to Church Bank for this Principality Premiership League fixture.
I make no apology for commencing by revisiting Wednesday evening’s game against league leaders Merthyr. We were served a feast of fast, fierce rugby by both teams that simply demonstrated how good the rugby is at the top of the club structure. If the WRU think the Premiership isn’t of a high enough standard and lacking the intensity and skill level required developing potential regional players then they need to watch a video of this game! On occasions both teams defended as if their lives depended on it and then there were flashes of attacking brilliance and pace, the only ingredient that was perhaps missing was a packed auditorium but in fairness the lovely weather and top of the table clash had drawn a reasonable crowd for a rearranged mid week fixture and they all went away appreciative of the menu that had been served. From a Llandovery viewpoint a number of supporters commented that the game actually highlighted “what might have been” this season and a quick analysis of the Drovers’ form since Christmas shows that we have the best or second best record depending on which criteria you look at. If we had won just a couple of games that were at the time disappointments or surprise defeats against Aberavon, Bridgend or Cross Keys then we would certainly now be contesting for the top spot for the 18/19 season.
In the context of today’s fixture one of the spectators on Wednesday evening was one Emyr Phillips who was standing quietly in the opposite corner of the park to where he has previously watched the Drovers as a Hen Borthmon and he was surely taking copious notes to inform his preparation of our opponents from just down the valley. The Quins have recently had two big wins against Pontypridd and Ebbw Vale to make absolutely sure of their position in the Premiership next season so they will no doubt feel that they can now focus on gaining revenge for their second half demise in the corresponding fixture at Carmarthen Park earlier in the season.
Our match sponsors are JCP Solicitors, Touchdown Design and JR Pet Products whilst the match balls are sponsored by Jonathan Davies NMR, Ceredigion Plumbing Supplies and Teilo Vets. Thank you all!
As we approach the end of the season I would lie to take the opportunity to thank our Ball Boys who play a vital role at each home game in recovering the balls and ensuring some on field continuity. Regardless of the weather some combination of Sam & Noah Potter, Osian a Cai Evans and Kainan Dwyer have done a great job – da iawn a diolch bechgyn!
Now how about celebrating a great season with some “posh nosh” and an evening with our coaching team? In its inaugural year our 23 Club has been a great support for the club and as part of the membership package there is a Gala Dinner planned for Friday 10th May with our coaching team as guest speakers. There are a few additional tickets available so what better way of showing your gratitude to Euros, Simon & Gareth than by coming along to enjoy their company and some good food and free drinks – more details from Gina, Huw S Thomas or any Board Member.
Er Gwaethaf Pawb a Phopeth Ni Yma o Hyd! Ymlaen Y Porthmyn!
Peter Rees Cadeirydd/Chairman