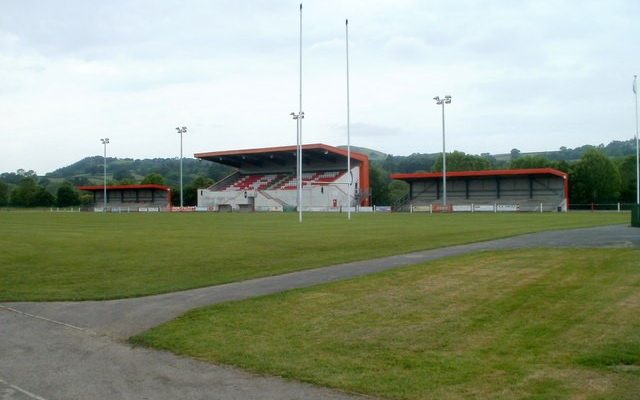 Croeso cynnes iawn i bawb o Glwb Rygbi Aberafon i Fanc Yr Eglwys heddi! It is with great pleasure that we welcome Aberavon RFC to Church Bank for this crucial Indigo Premiership Cup match.
There seems to have been some confusion regarding the next, knock out, stages of the cup competition with various web sites providing contrasting information. We can now confirm that the top two clubs in each region will have home fixtures against the 3rd & 4th teams from the opposite region. So, as it stands, prior to this fixture, the Drovers will entertain Merthyr whilst Aberavon will play RGC. However just as the positions at the top of the West region could easily change on this last round of the regional part of the competition so could those in the East where RGC have a home fixture against Ponty and Merthyr have a tough game away at Cardiff. Regardless of other outcomes I am sure both teams at Church Bank will be focussed on gaining the bragging rights as to who can claim to be “the best in the West” and judging by our previous fixtures it could go either way!
Today’s Drovers team again lacks the leadership of Jack Jones who has been rested over recent weeks as part of the strict protocol for head injuries, but it has to be said that whilst we certainly look forward to his return our recent games have demonstrated that we have a number of players in the squad that can make the step up whenever required. It is also great to see how Kristian Jones who in previous seasons has been used frequently as a utility player anywhere in the back line up has this year taken the opportunity to take the key No 10 position and make it his own! We must also note Rhodri Jones’ huge contribution to the Drovers as today he makes his 201st appearance. Rhodri’s achievement and overall contribution has triggered a quick survey amongst members and supporters as to who do you think has been our most influential player over the last 10 years? All nominations to Gina by email by 24th December please. Another popular Drover that has recently taken a step forward is our Dino! Followers of Welsh Rugby on social media will have seen just how romantic a prop forward can be with DD sneaking up on his long-term girlfriend and Wales Women’s XV centre, Hannah Jones, to ask for her hand in marriage! Well done Dino and huge congratulations from everyone at Church Bank!
It is with huge regret and sadness that we once again record the passing of one of the Drovers’ family. Doug Davies was not only a former Club President during the 90s, when the club made huge steps forward on and off the field, but he was a sponsor, lifelong supporter, a member of our “25 Club” since its inception and just a few weeks ago he was on the terraces at Church Bank enjoying the game (and advising the referee). More importantly Doug was an enthusiast for everything that the club was involved in on and off the field. His contribution to the club was hugely significant but he also made an important contribution to our community using all his entrepreneurial skills to establish a new business in Llandovery which brought employment at a time when it was so needed. He will be missed by so many people and we send our heartfelt sympathies to his entire family. 2021 has been such a sad year for so many families and each time we lose another friend or relative it doesn’t get any easier. I am sure Doug will want us to remember the good times, and there were many, but today we think only of his family. RIP Douglas Wyn Davies.
Today’s match is sponsored by our loyal band of travelling supporters whilst our match ball is sponsored by David and Caroline Boorer – Thank You all!
Er Gwaethaf Pawb a Phopeth Ni Yma o Hyd! Ymlaen Y Porthmyn!
Peter Rees Cadeirydd/Chairman