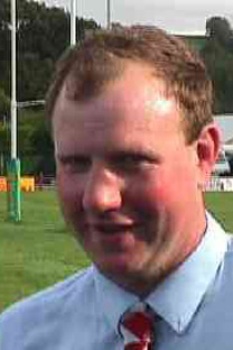 Chris captained the Drovers over three seasons at a crucial period in the late 80s and early 90s and he represented the club on 245 occasions over 17 seasons. In so doing Chris built a huge personal reputation for his commitment, work rate and natural fitness which was developed not from pumping iron in a gym but rather from his day to day work on the farm. Indeed Chris’s appetite and capacity for honest hard work meant that to many loyal Drovers’ supporters he was one of the best back row forwards to ever play for the club and bearing in mind the list of potential candidates that is some accolade. Whilst Llandovery was always Chris’s club he also represented Dunvant when they briefly joined the then elite at the top of the club game in Wales and he was certainly never out of his depth.
Chris’s on field appetite for hard work has epitomised his approach to life in general and on eventually retiring from rugby all his efforts have been invested in building a successful farming venture at Cwmcowddu and in so doing ensuring that there is a viable future for the next generation of Davieses. Whilst playing at Church Bank one of Chris’s proudest and most loyal supporters was of course his father, Ken Cwmcowddu, always in the stand and quietly appreciative of the Drovers’ game, Ken would be so proud of how Chris, Sian and family have built on his work on the home farm!

Chris’s passing has come so suddenly after a battle with cancer that was borne and fought by Chris (and family) with such quiet determination and fortitude that further epitomised the strength of the man and why this week’s news has come as such a shock to our entire community.

The Drovers have lost so many good people over the last few years and it does not get any easier with each passing as they have all been such good friends and unique personalities but our loss is nothing compared with that being faced at Cwmcowddu and our thoughts and support is with them now and for ever more. Cydymdeimlwn yn ddiffuant â Sian, Ffion, Rhodri ac Aled a hefyd Adrian a’r teulu.
Peter Rees
Chairman, Llandovery RFC