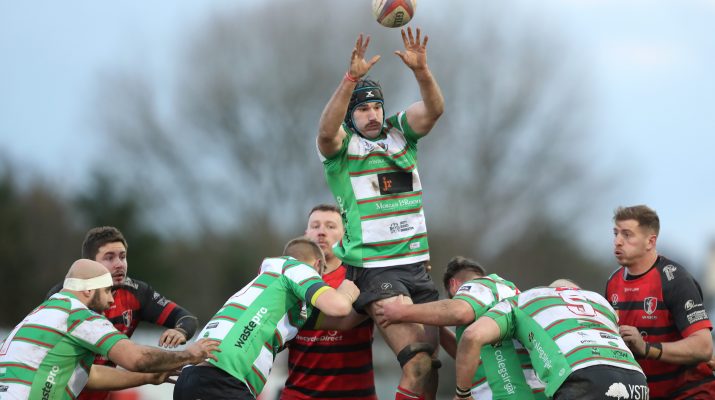 DROVERS BEST IN THE WEST

In the last game of the league stage of the Indigo Premiership Cup, the Drovers won a wonderfully tight contest right with a minute to go with a Rhodri Jones try writes Huw S Thomas.

And with the victory, the Carmarthenshire club ended on top of the West Conference table, with the satisfaction of doing the double over the Wizards, their toughest opponents.

They now go forward in the New Year to entertain the fourth placed East side in the quarter finals whilst Aberavon will be at home to the third best of the East.

The long awaited show down between the clear top two sides in the West did not disappoint a vociferous crowd of supporters from both sides.

There was neither winner nor loser in terms of the quality on display with both coaches expounding the quality of the opposition.

Sporting loser Jason Hyatt believed that the display of both sides was outstanding.

“There was nothing between two adventurous sides and a high quality game confirmed that the Premiership is doing its job in preparing players for higher things.”

“Anyone doubting the value of the Premiership should have been here to see and have their eyes really opened.”

It was a view that his rival Euros Evans fully concurred with.

“Terrific game. When Aberavon won the first half by putting us under huge pressure and we came back strongly to pip them just before the final whistle.”

“We struggled in the opening quarter and kicked poorly with the wind but we improved our accuracy after the break and although behind in the dying stages ended in style.”

The crowd certainly got their money’s worth with the general consensus that the winning try was one of the best seen at Church Bank for many a day.

Top of the line out ball from Joe Powell, flanker Jordan Evans at scrum half feeding centre Rhodri Jones on an angled burst, lightning slick support handling from prop Dino Dallavalle and hooker Dafydd Hughes and quick recycling to fly half Kristian Jones allowed Rhodri Jones to slip two defenders on his way to the corner.

In bright sunlight, Aberavon exerted all the early pressure and a brilliant kick and gather from flanker Lloyd Evans put scrum half Rhodri Cole over, full back Chris Banfield converting.

Playing expansive rugby, the visitors went further ahead when fly half Joe Thomas sliced through for another try converted by Banfield.

Llandovery had hardly touched the ball in 20 minutes but then a weaving run from full back Will Thomas all but brought them back into the game.

It was Aberavon’s turn to defend and they did it well but were lucky to keep a clean sheet when home fly half Kristian Jones failed to take a difficult pass near the goal line.

The Drovers kept improving and on the stroke of half time, relentless charges at the Aberavon line ended with centre Rhodri Jones sending wing Ashley Evans over wide out, Kristian  Jones converting to make it 14-7.

Three minutes into the second half, the Drovers were level, scrum half Lee Rees putting in wing Aaron Warren, fly half Jones again converting from the touchline.

Home tails were up, Jones kicking a straight penalty for the lead in an absorbing contest between two class sides,

Aberavon had to dig deep in the face of confident attacks but another Jones penalty made it 20-14 with 10 minutes to go.

In a tense finish Aberavon replacement Jon Phillips fielded a cross kick right in the corner and Dan Edwards added the extras for the lead with a fine conversion but with time all but up  Llandovery attacked from a line out 40 metres out for Rhodri Jones to slip through wide out, namesake Kristian adding yet another touchline finish.

It was all breath-taking stuff.

With the Cup now on the back burner until the Spring, attention switches to the league which starts on December 11 when the Drovers will entertain RGC in the first of 11 league games, six away and five home.