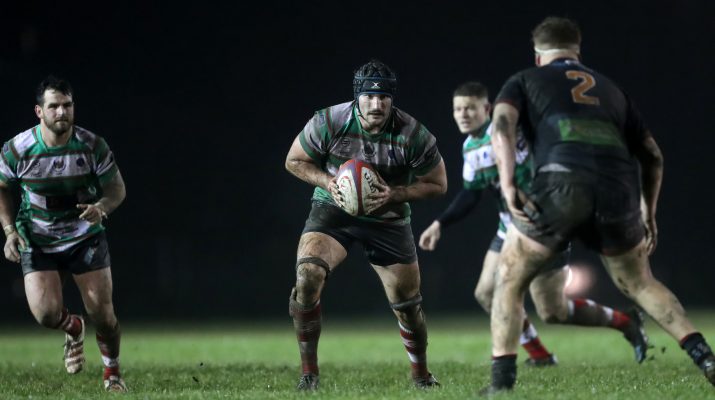 In a game that did not kick off until 5 30 by request of the North Walians, it was the Drovers who looked more at ease throughout, confirming the rich vein of form which has seen them lose just once all season.

Their retention of a wet and slippery ball was out of the top drawer and were it not for some heroic defence from RGC, the Llandovery forwards would have fashioned two, three or even four more tries.

Scarlets fly half Angus O’Brien stepped confidently into the number 10 shirt, linked well and put in some prodigious licks in the second half.

He also chipped in with a try, two conversions and an angled penalty fior a personal haul of  12 points.

There was extra interest in this game as it might turn out to have been a dress rehearsal for the Indigo Cup quarter final against RGC, all depending on the result of the play-off game between the North Walians and Pontypridd on January 8.

Making light of the damp conditions, Llandovery took an early lead when a patient build up ended with outstanding flanker Iestyn Rees driving over wide out.

Rain at their backs, RGC responded well enough but went further behind when a close range line out worked in centre Kristian Jones for a try converted by O’Brien.

A penalty by Danny Cross reduced the deficit but the centre then missed from long distance in ahard fought contest..

A very good O’Brien penalty made it 15-3at the break and it soon became 20-3 following a try by wing Ashley Evans who won the foot race after a hack kick through by centre Rhodri Jones.

With the home pack in full control, O’Brien slipped through for the bonus point try which he converted before RGC wing Zach Clow was yellow carded.

The North Walians refused to throw in the towel in the face of mounting pressure but a late dash up the wing by Evans gave replacement centre Rhodri Wall the chance to wrap things up with a fifth home try.

It was to Llandovery’s credit also that they did not concede a single try against a side that was well organised up front and direct behind the scrum.

Having coached meanest defence in the Premiership, the departing Lloyd Phillips will look back with huge satisfaction at his time at Church Bank both as a former skipper and defence coach.

Work commitments in Pembrokeshire which have made ever increasing demands on his time sees him leave the club with everyone’s best wishes.