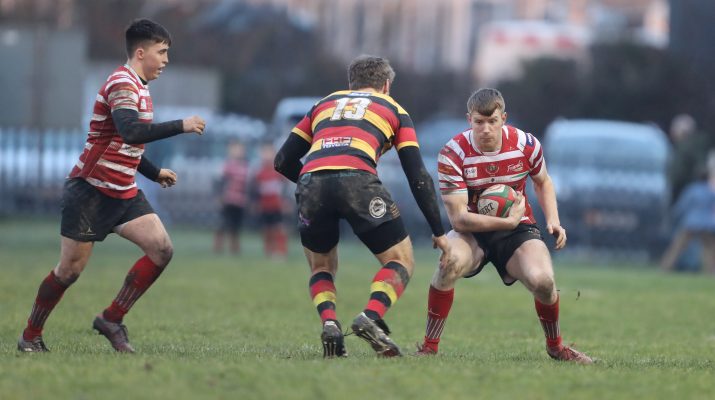 After the August warm up games proving that both the Drovers and the Quins will again be competitive in the new Premiership season, the two local rivals will meet on Saturday in a “friendly” at Church Bank (KO 2 30pm) writes Huw S Thomas
There is extra spice to the rivalry this year as the two new club captains – Lee Taylor (Quins) and Jack Jones (Llandovery) will not only come literally face to face in the second row but renew close acquaintance as former playing colleagues at Llandovery College.
Both Taylor and Jones had distinguished careers at the Carmarthenshire independent school , featuring in both second and back row of the scrums in wins over fierce rivals Christ College , Brecon.
26 year old Taylor made three appearances (2010, 2011 and 2012) and Jones two (2009 and 2010) in what the doyen of Welsh rugby writers JBG Thomas of The Western Mail dubbed the “Welsh Varsity Match.”
They played together in the 48-5 win over Christ College in 2010 when Jones grabbed two tries in what The Western Mail described as an “exceptional” performance.
Llandovery College coach at the time Iestyn Thomas remembers both as very talented players.
“Lee played in the Brecon Match when a callow Year 11 pupil and went on to shine in all three Brecon games, the first alongside Jack in 2010.”
“He had speed, mobility and alertness and now being made captain of a Premiership side at just 26 confirms his development under the Quins.”
“Jack was the best College forward of his time along with Richard Bloomfield who- by the way – has gone on to have spells with both Drovers and Quins.”
“His work rate for a back five forward was phenomenal, tireless in ruck, maul and open play and an ultra competitor in all phases of play.”
“And what will make him a very good captain for Llandovery is his astute reading of game situations – the mark of an outstanding leader.”
“In my opinion, he has much to offer not only at Premiership level but higher up the scale. At 6” 4’ and 18 stone, he is big, mobile and skillful enough to hold his own in professional rugby”
Llandovery coach Euros Evans, too, expressed the same sentiment as Thomas

“Jack has always been a leader within the squad and when our former captain Richard Brooks stepped down, he seemed the obvious choice. He leads through example and demands high standards from his team mates. He’s got a wealth of experience and is a role model for the younger players in the squad.”

The careers of Thomas’s former charges went in different directions after they left school with Taylor very much a one club man with the Quins and Jones enjoying life with Welsh clubs Tonmawr, Swansea, Neath, Llanelli, and Aberavon along with a spell in Italy with Rovigo and a brief sojourn at National League One Darlington Mowden in 2017.
28 year old Jones comes from a famous rugby background, with former Swansea and Neath back-rower Robin Jones his father and Neath, Cambridge University and Wales lock Brian Thomas his grandfather. Jones has made 70 appearances for the Drovers since joining in 2017, eclipsed by the 150 made by his old school mate Taylor for the Quins and both will be all out to get a win in the local derby.

It will not be long before the season starts in earnest with the introduction of the Premiership Cup which will run up to Christmas.
The 12 Premiership clubs are divided into two conferences with the Quins and Llandovery in the West group of clubs alongside Llanelli, Aberavon, Swansea and Bridgend.
The Quins entertain Llandovery at The Park on September 25th and travel to Church Bank on November 6th
Cardiff, Newport, Merthyr, Pontypridd, Ebbw Vale and RGC are the East conference.

The top two from each conference will qualify for the semi-finals of the competition.

In pre-season , the Drovers had easy wins over Aberystwyth 55-7 and Llangennech 41-0, the Quins beat Aberystwyth 56-12 before gaining an exciting late victory 17-15 up at Oxford against National League One side Chinnor.
Early indications suggest that there will be little difference between the two sides once again and that Old Llandoverians Taylor and Jones will be at the very heart of the battle for supremacy whether it be at friendly, Cup or League level.
Llandovery v Carmarthen Quins Sat Sep 4 (KO 2 30pm)